Daytona USA is back (again) on PS3 and XBOX 360 (PSN & Live respectively)!!! And although Sega already released SEGA Racing Classics ( a name change, because even though the game was released years before the Daytona USA Museum opened in Daytona Beach, the International Speedway Corporation had already held the trademark to the name "Daytona USA." Any future game would require a license to use the name Daytona USA.), essentially the same game running in 720p resolution, and the lyric "Daytona" in the intro & Advanced track (Dinosaur Canyon) removed (licensing issues).


Fresh Oil and a New Coat of Paint: Experience the classic retro graphics of the original arcade hit in an enhanced,16:9 widescreen format


Let's Go Away: Relive your glory days of racing to the sounds of the original Daytona USA soundtrack, also available in Karaoke Mode (admit it, you know you've been singing along anyway)


Reach the Winner's Circle: Challenge AI opponents in Arcade Mode, race the clock in Survival and Time Trial Modes, and trade paint with up to eight players in online multiplayer to place on the worldwide leaderboard


Daytona USA will be available from October 26 on Xbox Live for 800 Microsoft Points and from October 25 on PSN in the States for $9.99. Those of us outside of North America will have to wait until November to play the PSN version.

Old arcade flyer below, as well as the two player arcade set-up. 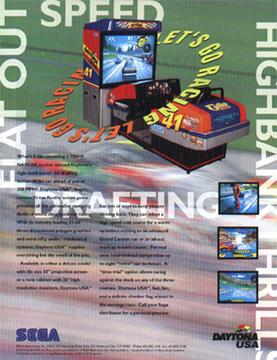 An amazing game in the arcades and on the Saturn. I'm so happy that finally I can play the true version at home


A part of me is a little sad that they have chosen this over an arcade Sega Rally port though. Best racing of all time along with snes Mariokart.

Yeah heard about this a few days ago. I have the dreamcast daytona.Which is a tough game to master even with the steering wheel.

Hope it comes with splitscreen multiplayer, doesn't look like graphically it'll be too strenuous on any modern system!!

Just found a sweet arcade that has a 4 player version of daytona 2.im gonna enjopy this one.

Just letting you all know that I bought this off the US PS3 PSN Store for $9.99. Got a free theme with it as well.


Works well with the GT driving force, a bit laggy online as there is only people to play in the US at the moment. Single player is 100% like the arcades. AWESOME!!!!
Last edited by a moderator: Oct 27, 2011


i tryed playing daytona 2 less than a week ago with my brother down an arcade and i got stitched right up with a machine which had a duff wheel that neaded to be turned 90o to travel in a straight line. completely ruined it for me.

SONY said:
Just letting you all know that I bought this off the US PS3 PSN Store for $9.99. Got a free theme with it as well.


Works well with the GT driving force, a bit laggy online as there is only people to play in the US at the moment. Single player is 100% like the arcades. AWESOME!!!!
Click to expand...

i might buy this when i can afford to get xbox live again or else i might just get it for my ps3.

This goes out to all the PS Vita owners out there with RR. Like me!


Jumpman said:
WOW, now I might need to get Ridge Racer!

Last edited by a moderator: Jun 2, 2012
You must log in or register to reply here.