I'm looking for two older games I used to play when I was younger on my windows 95 pc, it must have been in the middle or late 90s. Well I'm hoping I can replay them on the pandora.


About the first game I remember it being some sort of a puzzle game with a top-down view. I seem to remember a lot of pink or purple shades and a floor textured similar to a chess-board. Also remember some small yellow spheres, I don't know if you collected them or something. You controlled your game character through a number of rooms and tried to avoid death. There were some sorts of enemies or hazards but I don't remember much more than that. Oh yeah there were a picture of your character in the top-left corner.


^ I remember reading about a gp2x port a couple of years back but I remember the screen resolution not being optimal for it since the game ran at a higher resolution normally. And I'm pretty sure the game started with a 'D' and the title may have consisted of only about 4-5 letters. The name was short.


Name the game and let me know if there is a way of running this on the pandora. Knowing it did exist on the gp2x it could probably through ginge. But then it would still run at gp2x resolution. Any chance source was released? Maybe I could attempt a native port for the pandora..


Ok so game number two I don't have a lot of info on... I believe it was a dos-game but I'm not 100% certain. I know it was some sort of racing game and I think you were in outer space. The view looked sort of like audiorace or so, obviously not as good graphicsor fluid gameplay. There were holes in the ground and jumps and you tried to avoid falling down I think. Sorry, it was a really long time and that's about all I got on it, never had the full game only shareware version. I'm hoping I can find the name of the game and try it in dosbox or qemu.
Last edited by a moderator: Oct 7, 2012

2nd game sounds like Trailblazer on the C=64, I have no idea what it's called on the PC.

For There was skyroads. And I'm pretty sure its available in qemu wiki since it now freeware.


I guess the wiki only has this xmas edition. Its in the list of images at the bottom of the page.

Ian J said:
2nd game sounds like Trailblazer on the C=64, I have no idea what it's called on the PC.

That looks like the game, yeah. Well I guess maybe the PC game I played was a clone of that. I remember the graphics looked slightly better, but still simple like that.


dsleaf67 said:
For There was skyroads. And I'm pretty sure its available in qemu wiki since it now freeware.


I guess the wiki only has this xmas edition.
Click to expand...

first game doesnt sound like qbert, but that one snake game where you jump around and collect spheres, whose name is slipping my mind right now

The first one sounds a bit like SKWEEK to me -


Just looked on openhandhelds.org and it looks like DROD (Deadly rooms of death) might be what you're looking for: 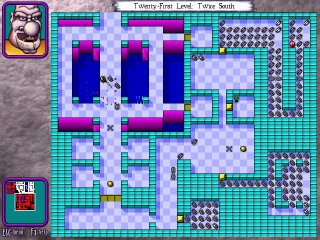 BTW, I tried DROD with ginge and it wont load for some reason.


You can probably ask the author to compile a version for the pandora
Last edited by a moderator: Oct 7, 2012

Doesn't look like there was ever a port for pandora, but I found the one for gp2x. No sourcecode though. Looking at the official website, no sourcecode for the free Architect's edition which is what the gp2x version was, however sourcecode for the commercial editions seem to be available, and you're allowed to even redistribute it as long as you do not distribute the original artwork/levels/resource media.. I might look into it.


EDIT: Think I just found both the sourcecode for DROD-AE and a buildscript to compile it on linux. Can't really play with it now though, but I will surely look into it soon.
Last edited by a moderator: Oct 7, 2012

Have you tried running it through ginge?


edit: Just saw apersonthinks tried it with no luck, ah well. :/
Last edited by a moderator: Oct 8, 2012
You must log in or register to reply here.

X
Thinking About Buying One...

Wandor the game is it still being made?

How to find out which Pandora model I have?