However it could also function almost as a Carputer (CarPC) or at least as a car media center and entertainment console ;"]
http://en.wikipedia.org/wiki/Carputer
There is even open source GPS and navigation software available, so this could work as a aftermarket navigation system.
Click to expand...

I much rather have a flat set-top-box style box, (similar design type as Apple TV), with optional VESA mounts so that it can be mounted on the back of any monitor or TV 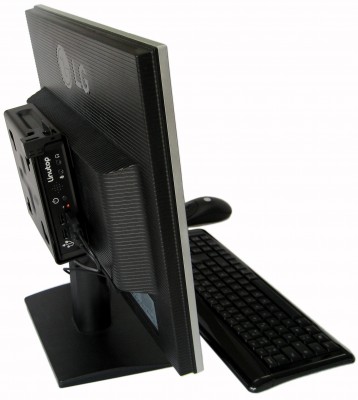 PS! It is isn't obviously already I spell it out here; for me personally would at least have to be capable of running XBMC Media Center for Linux on ARM in native 1080p resolution :wub:

XBMC would serve as the main dashboard and application launcher with a 10-foot user interface B) ....but also touchscreen friendly for smaller screens
http://en.wikipedia.org/wiki/10-foot_user_interface
Last edited by a moderator: Dec 20, 2015

It would have to be something a bit special for me to save up and payout again.

You could have the Pandora board as the main one,
hub/router as another,
special ones for original controllers (snes/megadrive/playstation/etc.),
a decent amp for the audio/video connectors,
one for adding laptop hard drives,
you get the idea

And now for a bit of heresy.

Skip this idea. Instead, start a secret project for a mid 2010 Pandora i. Same or nearly so case, keyboard, battery, screen, etc... to save on hardware costs. but an i386 compliant chip (Via SOC? Intel Atom? AMD?) and 2GB of RAM with a half micro pcie SSD drive (which would likely bump an SDHC slot out for space). Raise the price 50% for this version? Ship it with Linux and Wine or the Windows 7 el-cheapo version for an upcharge.

Why? So you have something to sell to the seemingly endless line of people asking if they can run Windows and X86 apps on the Pandora.

I'm only half joking. The people who find their way to the forums, take the time to ask the question, then are treated as morons and summarily shown the door may be a potential audience. They clearly have an interest in a product to fit their needs, but the Pandora isn't that product. The primary competitor in this space, OQO, is gone. A pocketable machine in the pandora's dimensions that can play World of Warcraft smoothly with great controls... Might just have an audience.
?

I would be interested if it had a VGA or HDMI output. That is one thing that I miss in the pandora handheld, a way to connect it to a monitor and a pandora cube should have this.

I would buy a console version providing it had a cd/dvd drive so i could play PS1 games, sega cd games, cd32 (port willing) and burnt games off a disc.

Grench posted on Jun 2 2009 said:
The people who find their way to the forums, take the time to ask the question, then are treated as morons [...]
Click to expand...

Actually, we found out that they are really treated as camels.
Last edited by a moderator: Dec 20, 2015
T

I've not read the whole thread. But I think my situation mirrors a lot of what has been said

I voted 'If it can do X' as a kind of don't know. The idea of a light weight computer that could stream video from the web to the tv in the bedroom etc might be interesting. Just not sure at the moment. If it is really a Pandora in another box...way not just use the Pandora and TV out lead I've ordered?

I think it is brilliant, can I assume it would work as a wearable PC if you brought a display and power supply? (and half-moon keyboard, obviously)

I don't know how feasible high def would be, or if it would even be warranted (Can the high-def media be decoded? Is there enough power to upscale standard media?). I can see this as an excellent media player, web browser, retro and homebrew gaming device.

Best of all it won't overheat, or scream from fans and Hdd's, like most consoles/HTPC's. Or take up loads of room either.

I would suggest that at the very least a controller or a few (9+dpad) face buttons comes with it (maybe the keyboard or the d-pad, not the analog controls).

I mean the board wouldn't need to be as complex, no built in gaming controls, maybe stripped costly extras like wifi and Bluetooth. No built in screen and speakers on the device.
Then all your are adding is a HDMI out put, extra usb ports, you can get 160gb Hard discs for about $25 these days and cd/dvd drives about the same price.

They've already got the boards in mass production, re-designing them just to make a console version would take too much effort. It's actually much cheaper to keep the original board even if the controls and whatnot go totally unused.
T

My initial thought was 'no', but I'm coming towards thinking 'maybe'. I'm not sure what I'd use it for, if it's going to be primarily a pandora with no screen, no keyboard and not portable. It becomes a low-power always on hub, maybe a file server, maybe doing a bit of home automation, maybe working to wake-up a myth-backend box (I don't think it's capable of recording?). As an audio player, it has potential, but then it needs some sort of primitive I/O built in.

What it will do is provide internet radio. Now I pause to think about this, if you compare it with the current generation of wi-fi radios, actually it does have some potential as a product with minimal investment. Simple setup - plug in a keyboard and TV, or have it running a trivial webserver out of the box, able to serve media files, or access them from some other local device.

Grench posted on Jun 2 2009 said:
The primary competitor in this space, OQO, is gone.
And when you understand why the OQO is gone, you'll understand why your idea is not feasible. The OQO was a $1500-$3000 device and was almost completely unusable due to heat and battery life issues. Intel has made quite a bit of progress, but even the most efficient Atom CPUs still use nearly 6x as much power as a Cortex A8. What's worse, the chipset needed to run the Atom requires something like 10x the power of the controller parts of the OMAP3.
Click to expand...

I heard on Slashdot that they finally wrangled an ARM chip into the Asus EEE.
Unfortunately, it still didn't fit in anyone's pocket.

Top Asus engineers are working on the space dilation tech necessary to produce a UMPC.
R

if it can be very cheaply done, i dont see why the cube cant be sold alongside the other individual components really. sell the board, the nubs, the case, the keypad, the buttons, the cube, the pandora, etc. it will always have appeal somewhere along the line to some modder. someone is likely to want to use the nubs on their own projects, or build some kind of customised home device with the technology and will probably butcher a pandora to get at it. i wouldnt really rely on it being much of a money spinner though. if its not too much to make happen though, by all means milk each part of the design as far as you can i say.

I think the device would have to be technically superior to the Pandora with a faster processor. Modded XBOX's, 360's etc can pretty much do the same things, so to get my money i think it would have to offer things like close to flawless n64 and Dreamcast emulation.

Everyone seems to have so many boxes under their TV now, so to justify another it has to offer something special.

That's the market we want to hit, but our unit would be cased, have the pandora controls and still have the battery in it.

That turns it into a strict no from me then. I would understand it if it was a devboard etc. But controls on a "stationary system" are pretty useless because you can easily provide your own. You also have a power supply whereever you go if you need a display anyway.
And last but not least, it will probably break compatibility and it will be hard to develop the same applications for different resolutions etc.
I think something like this could be an very unclever move because you might loose developers who think everything is getting too complex. (Same goes for hardware changes in future batches)
If I was you I would start a new product series and not call it Pandora if you really want to hit a new market..

It's a neat idea, but I just don't see myself buying one. I will probably just use my Pandora to connect to my TV. I'll do pretty much the same..

Equip and position the portable Pandora for set-top use as well.
The $110 price difference is not worth “Sacrificing capability.”

Pandora audio - Which is better?

Kickstarter for TV out Cables
2