QuadTris is a puzzle game, playable on the GP32 console.
The game was created in less than 24 hours for the "speed coding" contest held at the retro computing convention AC 2011, the 16th and 17th April 2011 at "Congis sur Thérouanne" France.

The game won the first prize!

Principle of the Game:
You have to match at least 4 blocks of the same color in a square or rectangle form.
For this you can rotate the blocks 4 by 4 using a cursor and the A button.
As the level increases, new colors appear as well as bonus and penalties.

Bonus:
-If you blow up a block with the "Bomb" symbol, all the blocks of the same color will explode.

This is the final version released in 2014:
-Now using the official GPSDK (provides only one FXE file for all GP32 consoles and emulators)
-Switched to 8bits graphic mode: The game is now seamlessly playable at 66mhz (the previous "party" version was running at 100mhz in 16bits and despite that, it had slowdowns)
-Added Title and Gameover screens + HiScore.
-The "leaves" particles now disappears smoothly.
-Removed the explosion particles that was ugly.
-Added music and sounds. 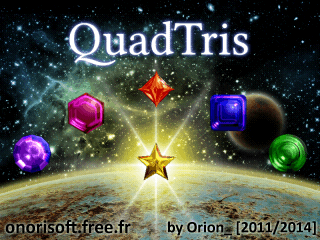 The GP32 lives on! What toolchain are you using these days? (If I remember well GPSDK are just libraries)

Sadly Mr. Mirko's SDK page is no longer around, but devkitPro still is

I'm using the latest devkitARM (from devkitpro)
But, the original GPSDK lib won't work with a recent gcc compiler (because of EABI issue)
so I thought I would get stuck with Mirko's SDK, that's why I started writting my own SDK (using BIOS call to avoid the BLU+ setup problem)
and then I found a "hidden" post on this forum about DJ Willis who appears to have the GPSDK source and recompiled it with EABI support, so now I'm using the official GPSDK, which is much better
http://www.distant-earth.com/gp32/GPSDK_EABI.rar

I really loved the GP32 back then, I was starting programming at the time, and got a bit frustrated to not being able to do some stuff I wanted
now, ten years later, I'm back and I will do what I want
Hopefully I can get a caanoo for people who don't have a GP32, it seems the caanoo is a nice machine, but it's not easy to find one through
I don't even know what handheld are the most popular, there are so much now ! wiz, caanoo, dingoo, gcw0, gamegadget, and other china machine...

While I don't own a GP32, it's really great that you took the time and effort to create a new (and great looking) game for it. Well done

It's a shame that few will be able to play it as the GP32 is pretty much forgotten nowadays.

As for machine numbers - there are more GP2X machines than Wizs, which are more common than Caanoos. GameGadget and GCWZero are very limited in number. The Caanoo is a really nice machine and I prefer it (comfort, build quality and control-wise) to my Wiz and two GP2Xs (F100, F200). They are sadly getting rarer all the time.

Orion_ said:
I really loved the GP32 back then, I was starting programming at the time, and got a bit frustrated to not being able to do some stuff I wanted
now, ten years later, I'm back and I will do what I want
Click to expand...

I know what you mean, the GP32 and GP2X really pushed me to learn programming, fun times Thanks for that GPSDK link.

By the way, might want to add Quadtris to the archive.

Hoho, time to resurrect the GP32!
The Caanoo is my next favorite open handheld.
N

I just want to say , cheers for all the fun Orion , you sir are a talented man , props to GpAlice to.

Yeah, between still cranking out GP32 games and some of his other homebrew/retro releases Orion is definitely awesome sauce!

Nice game! really enjoying it!
You must log in or register to reply here.