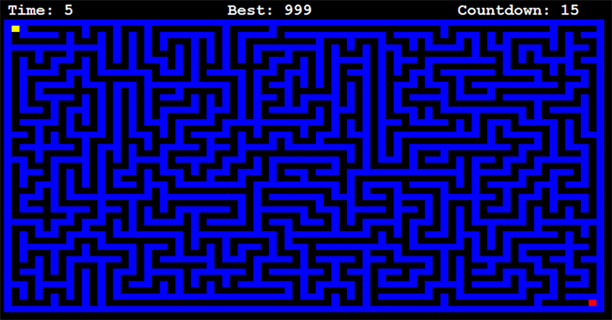 You are a Pandora-Subscriber and you try to get your Pandora, but everytime you think you finally got your Pandora there is a problem, like CC suck at his job or the production is moved to germany and stuff and you have start at the beginning. Nahh, just kidding...

For anyone who doesn't know, this requires WizStan's Java PND to be run first (to install Java to NAND). Then you need to unzip qrizmaze to SD, open a terminal there and:

(If you have Java installed on your desktop PC, you should just be able to double click maze.jar to run it there.)


I have some thoughts on this which I will return with.
Last edited by a moderator: Apr 5, 2012

Ok, my thoughts. Unfortunately the first thing I have to say is, there is not a lot of actual fun to be had here. The controls are kind of exhausting, and the timed maze regenerations mean that you know you're only going to get a short distance before it all changes. This means you have no reason to look ahead and map out your route. Rather than keep you on your toes as I suspect is the intention, it just gives you the sense that any effort you put in is going to be interrupted and ruined before you've made any real progress. It makes you feel like there is no reward, thus, greatly diminishes your will to continue playing.


Sorry if that's brutal. But it's not all bad news. I think this could be the basis for a good game, and as I started playing I immediately saw a couple of different directions it could go in.


First a word on controls. Having to constantly tap the d-pad gets a little tiring. I think this would really benefit from Pacman-like movement, where one direction press sets the player moving. And like Pacman, it should have pre-emptive cornering enabled so you can tap a change of direction before you get to a corner. These changes alone would improve the feel of the game immensely.


Now on to my ideas for evolving this game. You haven't asked for game design tips, but here they come


Expand on the frantic, changeable environment that you have already set out to create. But instead of changing the whole map, make smaller changes to the environment, like the physics, the wall material, doors opening and closing, etc. For some good examples of this kind of chaos in action, have a look at Pacman CE DX, SmallBall in ChangeLand, and ForgetMeNot. Complete map changes aren't out of the question, but make them very rare occurrences. And try to make the transitions as rapid as possible - the current blue screen transition, although short, feels like an eternity. Any changes in the environment should be instant, with no interruption to gameplay.


Make it a relaxing maze game. Quite simply, a digital version of a pen-and-paper maze. Ditch the timed changes and make it a simple start-to-finish mission. Add some gentle ambient music, have it leave a trail behind you like you would with a pen, and let the player cruise around freely. To encourage repeat play, devise a stats/highscore board that tracks time, distance, and turns (corners). With this info, the player could do comparisons of their sessions, even on randomly generated maps.


I'm making an effort to write a bit about every Rebirth entry, and the game that I unfortunately got the least out of is the one of the games I seem to have written the most about! I hope you take this to mean the same thing that I do: That you could be on to a good thing here, and it is very much worth developing further.


Lastly, if you're interested in packaging this as PND, JCloisterZone is another Java app that might be a good reference: http://boards.openpa...-jcloisterzone/
Last edited by a moderator: Feb 6, 2016
You must log in or register to reply here.