Just a quick heads up to say that I've "finished" my SantaMania "game". I say finished, but I've not got enough time to include everything I wanted, including the OPTIONS screen (I have done the redefine keys code, but haven't tied it in to the game yet). Hopefully I'll get an hour tomorrow to finish it properly, but it's fully playable now.

It's only intended to be seen as an interactive Christmas card really, so was only ever going to be one level long. And by that I mean short. The game can be played through in under three minutes. It's also a lot easier that this time last week, I've tweaked down the collision detection to be much friendler (my son cursed it, constantly - it was easier to fix than hear him whinging).

Screenies have been seen before, but here's one again anyway 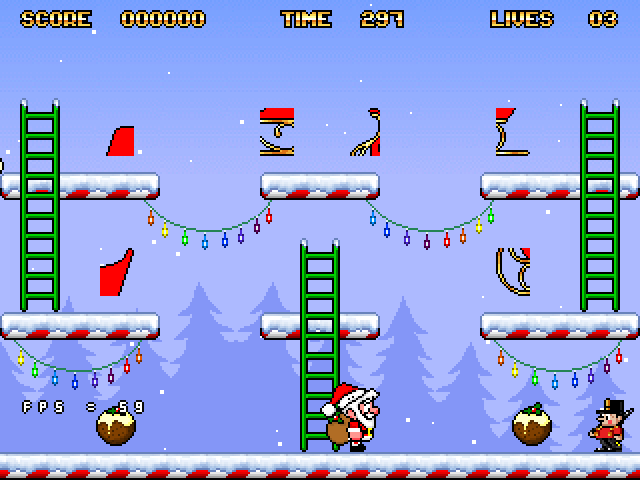 
Oops, forgot to say that I've only tried this on an F200. Shouldn't be any difference on F100 though.
B

Congratulations on the game, it looks really nice and plays pretty smooth. To have some more lasting appeal and replay value a highscore table would be nice.
Not possible to end the game in option screen or after the end of the game, but you will probably know that already.

The deers are a nice reward for finishing the game. Good job !

Of course there's a difference, the F-100 stick makes hard games even harder The PC version has Start Game binded to Options by the way, so it can't be played.

Merry Christmas to you too, sorry my card will be late this year

You need to press LEFT CONTROL to start the game, not ENTER.

I've updated the game slightly, so that the REDEFINE KEYS section is properly incorporated into the titlescreen. This option is for pc - don't try to reconfig the GP2X keys.

Very nice present for christmas...i love the graphics.
I hope you could make more levels...

Thanks and Merry XMas
T

Awesome looking game! Thanks for this cool game iprice.

Thankyou and Merry christmas to all that played the game. Yes it is short, but it still took a month to develop. I have no plans to extend it - it was only ever going to be an interactive Christmas card to the forums that I enjoy all year round. I might however change the game to something not associated with Christmas...

Hope you've all had a good Christmas and I wish you all the best in 2010. Hopefully I'll be devving on a Pandora soon, but whatever happens, I'll be producing more games next year for all the formats we know and love.

Chaos is our mode and modus

Nice Game iprice. I like it. What happend to the Wiz version? Problems with tearing?

sbock said:
Nice Game iprice. I like it. What happend to the Wiz version? Problems with tearing?

Kind of. I requested a GLBasic fix for the tearing. I got exactly what I asked for and tearing is now a thing of the past. Unfortunately the speed loss, as a result of the fix, makes the game unplayably slow (for me). I'm not happy releasing it as it is now.

Hi iprice... I have just found a thing to fix...
Today i have inserted my SD card on PC and i've noted one .MP3 file and 1 .wav file on the root ...i think it's related to Santamania...because they are called
sbxXJSanta.mp3 and sbxRTdrop06.wav ...
maybe they are temp files to be deleted by game when exit...but maybe the game don't erase it if don't exit properly on F200 i think..

Sounds about right. Unfortunately, there's an exit bug with GLBasic on GP2X - basically it doesn't! Hopefully it'll be fixed in the next GLBasic update. Thanks for letting me know Farox.

I can't believe I missed that game back in December

Bye and thanks for that Christmas present (yeah I'm late) !

p.s: any update about that GLBasic bug ?

Nope. I read recently that the bug is still present, despite a supposed fix. I haven't tried it myself tbh due to a major lack of time.

I'm glad that you enjoyed the game though Magic Sam, and better late than never - or is it early?
You must log in or register to reply here.
Share:
Reddit Pinterest Tumblr WhatsApp Email Link
Top