Aaaaand it's time for a newspost - it will be a short one (as I'm even more flooded with work than usual), but I hope you'll like it

Finally, a set of the case with changes is on the way to me.
It has EVERYTHING included (so we'll get to see the final logo aluminium plate as well).

Once I've received it (I don't know which courier they used to ship it, so I have no clue yet when they will arrive), we will find out whether all the remaining issues have been taken care of.
So basically: The stylus holder and the shoulder buttons and a few more smaller tweaks.
I'll do an unboxing video once I receive it - and we'll find out right away how it turned out!
Let's cross our fingers that the case odyssey will then be over!

Nikolaus received the test PCBs last week and populated them with the new power circuit right away.
It didn't work at first, as he accidentally got a power converter that couldn't handle 5V (yes, such things can happen) but it only took 2 hours to find the correct chip and only one day to receive it.
It was a bit bigger than the other one, so it took a bit of creative work to fit it onto the PCB... I was wondering whether I should show you the picture (as it actually looks like we have no clue what we're doing ), but it's too awesome in my opinion to hide it 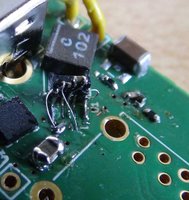 So yeah... that looks quite adventurous... but the important thing:
IT WORKS!
Yes, REALLY!
The USB port is working fine (we tested data and voltage) and the PCB remains totally silent!
Whatever power we draw from the USB port, no noise can be heard and the voltage stays totally stable.

The PCB layout data has already been updated and sent to Global Components to start the production for the prototypes!
All known issues of the CPU Board, the Display Board and the Mainboard have now been fixed.
If the case is fixed as well... well, then that's it.

It's hard to believe that it's actually drawing closer! Videos will help ;-)

ps Get some rest!

Do you have tracking or anything for the cases? Hopefully they don't get crushed again.
E

Amazing! Happy to see it all come together.
ps: Get some rest

I'm so ready for my Pyra!

This sounds perfect...Time come near.

My body is ready.

It's not ready until it has been properly tested, validated and verified, but it would be great if we can finally close the case of the cases.

When I said we should keep a wonky chip, I did have a different picture in my mind
I am very glad that a good solution has been found.

The progress sounds very promising. Thanks for the update.

rygD said:
Do you have tracking or anything for the cases? Hopefully they don't get crushed again.
Click to expand...

It's not being shipped with a logistics company now (it's only a couple of test cases), so I don't think it'll be crushed


Caine said:
When I said we should keep a wonky chip, I did have a different picture in my mind
Click to expand...

Very good news.
@EvilDragon Now we only must wait for the CPU board from the chinese manufaturer and test the fix for 4GB RAM?? assuming that the case will be ok.

Is that a temporary solution for making it fit, or will the final devices have to be wired up like that too?

EvilDragon said:
But let's not do the happy dance yet - let's wait for the prototypes to be finalized.
Click to expand...

But I had my happy dance pants on already!

Very promising news all together though! I guess fixed CPU board prototypes can start to be queued for production now most chinese factories are back from their new year holidays. I know the fancy industry standard simulation said they'll all work with 4GB RAM now, but I'd appreciate news of them physically working.

@silent_hunter That photo is very much a hack it together job to see it working. As explained in the news post, new layouts have been sent to GC already which will incorporate proper implementations of that bodge.

congrats everyone for making it this far. can't believe it's been 4 years since i've joined these forums... well, actually i can...

looking forward to my pyra!

ROFL - I thought it was just me that ended up doing stuff like that !

levi said:
@silent_hunter That photo is very much a hack it together job to see it working. As explained in the news post, new layouts have been sent to GC already which will incorporate proper implementations of that bodge.
Click to expand...

That's good! I figured that was the case.