Wow, I really really liked CoMiKe's design. It's not only simple and easy to use, but it also supports X applications. Bring it on!

Oh, and I'll bet you can take a light window manager and easily make it look like that.
A

L/R shoulders to navigate between page

and shorcuts for actions ( key numbers for example, c for calculator, key x for xterm ( terminal), p for Python/programming pandora .... )

i want it for my DS :lol: and my future pandora too

All icons are randomly choosen from my current KDE iconset, I don't pretend to run counter strike on the pandora

You think any way you could make a .psd or something, so people could make concept skins? I would like to show everyone how cool mashed potatoes could look.

(also, thank god all those news stories are impossible- the last one scared me )

All icons are randomly choosen from my current KDE iconset, I don't pretend to run counter strike on the pandora

That looks much cleaner, let's see it with the numbers gone please, (ibm3151 users figured out what the function keys are for somehow, bit insulting really), and increase the toolbar icons size by 10 pixels to fill the missing number space. Like to see it done in various shades of blue too but not necessary.
Click to expand... 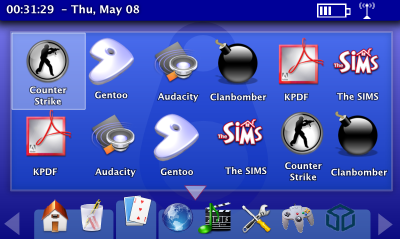 EDIT: much less saturated, best for the eyes 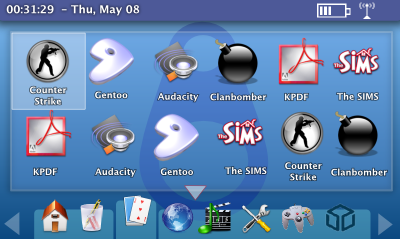 I like, although the battery and wifi icons are a bit lame in comparison to the others.

Also, are you sure its wise to put CS and the Sims icons on it, we don't want anyone getting the wrong idea and thinking that they well run on it.

Geuben said:
I like, although the battery and wifi icons are a bit lame in comparison to the others.

Also, are you sure its wise to put CS and the Sims icons on it, we don't want anyone getting the wrong idea and thinking that they well run on it.
Click to expand...

Looking good, toolbar could be jazzier. Definitely think there'll be posts somewhere like 'Amazing news! Pandora and counterstrike! Wow' or 'Pandora running Gentoo and KDE. Dang I wanted Ubunuts with a gnome on the desktop'
Last edited by a moderator: Dec 18, 2015

MASHED POTATOES!
Not finished yet

PoisonedV said:
MASHED POTATOES!
Not finished yet
That looks delicious. Good to see you're making use of the latest kernel.
Click to expand...

efegea, I really like the brown one. I think the numbers actually work there and the color is nice.
C

Location
I'm in ur loop

hmm i really like Blue ;-) .... and CoMiKe's design would make a nice advanced interface if it doesn't use too much ram 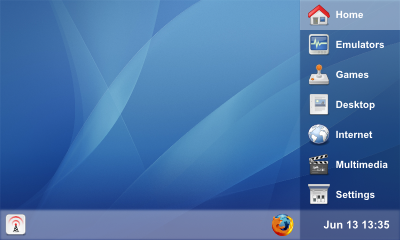 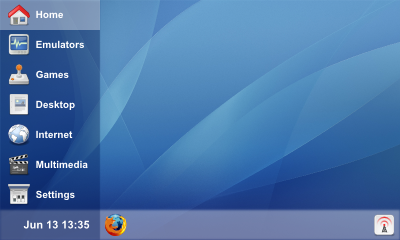 The first one for right-handed people, the second one for left-handed ones (it should be configurable on the "Settings" section).

I would like the Home section to contain a colour-configurable calendar and a box containing the tasks programmed for the next 7 days or so.

It could also contain icons for the most used or most recent applications.

The rest of sections should be self-explanatory (except "Desktop", that means desktop applications, not an option to show the Desktop).

The bottom bar would show the currently running applications.

It should be totally operable using the keyboard or the touchscreen (and the use of one of them not requiring the use of the other).

In fact, I would like to try and write it myself, but I'm not very used to X-Windows programming and it will take me some time (a lot, I think) to learn all the things I would need to.

I really like this UI. I was actually starting to read up on x-programming. Maybe if I ever get far enough into it.
Click to expand...

*High fives efegea for including a N64 contoller as an icon*

I've just been looking throught my old files for this, its a mockup i made in 2006 for a new gp2x UI, wit a few tweaks it could work nicely on the pandora... 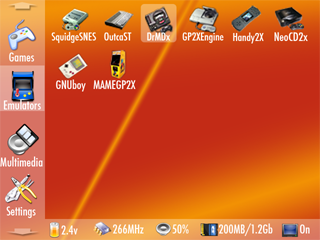 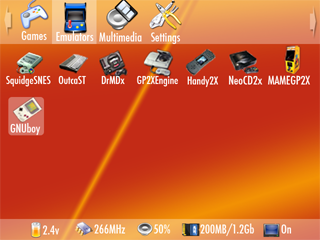 EDIT: found some more
Side 2: 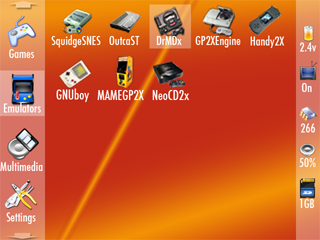 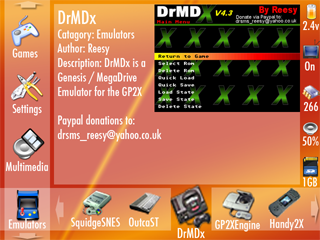 parag0n - Those mockups nice too. They look like they'd be real easy to navigate through.

Those look really nice. I hope the GUI will end up being a sort of mix between all of these
You must log in or register to reply here.

Attention Anyone Who Knows How To Code
2