I remember, long ago, being quite excited by the idea of the Pandora. A quirky mix of all the coolest ideas (PDA / "hacktop" / handheld game emulator) and ethos (open source / community powered) wrapped up in to a tiny clam-shell body. I watched it develop with interest, and was so tempted at the time - only put off initially by the cost and trying to justify to myself if it was worth it. I remember eagerly checking the first few YouTube reviews and being... disappointed. It seemed like it was "overpriced", not exactly sturdy, and, for some, hard to get anything to work. So I forgot about it... for a while.

I don't know when exactly, but I caught wind of the Pyra, and became curious that the project was still alive and occasionally checked blogs and posts. I didn't know anything of the people involved or any politics of the past, but I became more and more interested in the updates from @EvilDragon, and must say that this guy is a legend. Single-handedly he seems to have turned the community around, and made me completely addicted to finding any and all information about the Pyra. Now it's not just something that I'm tempted about but trying to find a good reason to justify buying it, but something that I absolutely can't wait for and am certain that it will be everything I imagine it to be and more.

It's also great that Pyra is being led by someone who's just as enthusiastic about making a great product as I am in how this product could be great. Modular, tick. Open source, tick. Hackable, tick. Community supported, tick. Linux-based, tick. Hand-held gaming, tick. Remote SSH & programming, tick. Magnetic nubs, erm... tick! Phone... no, didn't think about that, but tick!

I've also found it interesting, now I'm craving "input", to find that the Pandora is now very much loved, and has such an enthusiastic community. The only sour taste is I'm now in a post-Brexit situation, and my tardiness is costing a little extra.

This was the best decision you ever made. This project, the Pyra, is the best what a computer freak is able to think of. Sorry for this pathetic words. But it is the truth.

ClockworkCoder said:
The only sour taste is I'm now in a post-Brexit situation, and my tardiness is costing a little extra.
Click to expand...

Yep. I'm glad I preordered before these whole shenanigans, but I was thinking that maybe it was time to put down the rest of the deposit by buying some gift vouchers, to insulate myself against the actual outcome of brexit, but then our great leader had to open her big mouth, didn't she?

Thing with the Pandora is, it's a jack of all trades, but a master of nothing. Very much like I am myself
I've had one since the beginning, I was in the first batch Craig sent out. Build quality was good and I think a lot depended on the how much effort was put in by the person who put it together.
Of course I recognized some of the critics in the reviews but many were (imo) way too harsh.
I did end up upgrading to a GHz unit, which I still use daiy. I've put it in the original black case though which was better than the grey one I got later.
What I do daily with it is IRC and gaming. It's usually an always-on device which lays next to my PC and I bring it with me when I go to work for music mainly.
Browsing is okay, a bit rudimentary due to the low res screen and demanding webpages with plugins and the likes but perfectly fine when on vacation on some free wifi.
Especially the 4G and the better internet experience that the Pyra will add to this is for me just... nerd porn....


Eight Bit said:
Of course I recognized some of the critics in the reviews but many were (imo) way too harsh
Click to expand...

I did feel that a bit at the time - too many early reviews complained about "what can I use it for?" or "how do I get it working?". To me, those are the possibilities I consider before purchase, and after, I like to be asking "what else can I use this for?" and "how do I get this, that, the other, and something else working on it?" It's what I thought made Pandora a good name.

Pyra is admittedly a much cooler name though (irony not intended)!
S

I just pre-ordered as well.

Years ago I had preordered a pandora through OP UK, but after many delays and needing funds for a new laptop, I had to cancel. Got lucky there I guess, may have lost my money.

Now I am excited for the new Pyra and major props to the Pyra team and ED. Grit is the most important thing to have to get things done.

It seems we have recently been invaded by a scholar and a gentleman. 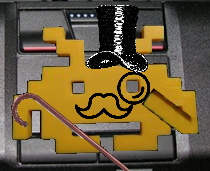 I, for one, welcome the futility at the level of resistance brought to bear against such a notion.

Good stuff. The early days of the pandora was so much fun. Figuring out how the damn thing worked was fun. There was always someone on the forums willing to help with problems, software, emulators etc. Once acquired I could then pass this knowledge onto others on the forum who needed assistance. I think the early days of the pyra will be similarly exciting. Especially when games and emulators arrive, in particular ones priorly considered borderline impossible. The community is a big part of it too, and the pyra will kick ass.

I still remember the triumph I felt when I was able to thether my old nokia via bleutooth as a modem via far fetched AT codes with the help of people here. Sadly it stopped working after a certain update of my phone.

It makes the device so much more rewarding... I might be a weird customer but for things to get a little bit less out of the box makes my engagement with it much more tight.

It just harks back to the time were my MSX greeted me everytime with a nice and comforting "Ok?" inviting me to do whatever I wanted I just had to figure out how to tell it...

I want to pre-order sooner, but I'm saving up for the full final price which sure is taking a while to get to that point.

I think what makes the Pyra so much better is the ability to update the CPU. If the Pandora had this the price could be justified. When it came out it was outdated, but the Pyra can at least have a few upgrades. Also the Pandora was just on the edge of being a capable computer. It plays games great but has such a small screen with no modern connector for a modern display but the Pyra has this.

I own the Pandora and love it for games but feel it is lacking on the typing/browsing/video/messaging department but the Pyra looks like it won't have these limitations.

second exodous said:
I think what makes the Pyra so much better is the ability to update the CPU. If the Pandora had this the price could be justified. When it came out it was outdated, but the Pyra can at least have a few upgrades. Also the Pandora was just on the edge of being a capable computer. It plays games great but has such a small screen with no modern connector for a modern display but the Pyra has this.

I own the Pandora and love it for games but feel it is lacking on the typing/browsing/video/messaging department but the Pyra looks like it won't have these limitations.
Click to expand...

Yeah since my smartphone broke, I've been stuck on a flipphone for a while and I was thinking of getting a new phone but someone suggested I get the Pyra. AND HOLY SHIT AM I HYPED!
I absolutely loved using the PSP as an emulation system, since it has buttons unlike a phone. But the PSP is pretty weak in terms of power, and the web browsing on it is absolutely terrible nowadays.

But to have a full linux computer handheld, with 3G, with a 10+ hour battery life... Man this is gonna be so worth it.
You must log in or register to reply here.

Do you want a simple menu and music player to start up at boot with global hotkeys?