Is there a list of recommended SD cards and brandnames for the Pandora? Or is everyone pretty much buying their own cards and keeping it secretive in which cards work best with Pandora? :3

EDIT - from this thread, people's recommendations and dislikes. Assume between 16-64GB and class 4 or higher?

I'm not sure there's any such thing as "cards that work best" that we're all keeping secret.

Personally, I've yet to try a card that doesn't work well for my uses (mine range from Verbatim, to SanDisk, to Kingston, plus one Bytestor, and a handful of Play.com's own-brand cards - all Class 4, though the Verbatim card and one of the Kingstons is Class 6).

Of course, anyone using eBay fakes is going to have problems regardless of what they try to use them in, but that's a whole other story...

My case was that i realized a "Need SDHC card, NOW" moment the day before my pandora arrived, drove to the nearest supermarket and bought an overpriced but quite certainly genuine (still did test it, its ok) and working Kingston 8G Class 4 SDHC card, and it does what I need to do on the pandora. No big secrets on my heart

I have used Panasonic, Integral, Toshiba and Bytestor cards and all have worked fine.

http://www.microcenter.com/single_product_results.phtml?product_id=0314845
Best bang for the buck in the US.

I have one of these for a GoPro HD Surf cam and one for my Pandora, debating on a 2nd, but also waiting for the SDXC prices to drop.

Now I have one Sandisk and one Extreme memory, both without problems.

If you value your data, do not buy cheap. Especially not SD cards.
N

So it's also probably best to go for multiple 32GB SDHC cards (either class 4 or 6) rather than a 64GB one?

Is there any real difference between class 4 and 6 (or higher) when it comes to the Pandora and SDHC cards?

Planning to go with Kingston or Sandisk at this point in time. :3 I should also mention I'm in the UK, so any reputable sites which might be doing a good deal would be handy too, haha.
J

Kingston has always been my favorite, even before SDHC existed they were faster than Sandisk
I haven't speedtested Sandisk cards but they're noticeably slower in use.

Do note that it seems like all Kingston cards are class 4, except for MicroSDHC cards 16GB and above (which have been class 2 everywhere I've seen them), but are in fact much faster than that. I don't have a class 2 Kingston card, so I don't know the speed of those. The normal SDHC cards are all class 4, even the 32GB one.

EDIT: SDXC might also be an option but I don't know anything about those, but the Pandora supports it so if you have the cash go go
N

Serafita said:
So it's also probably best to go for multiple 32GB SDHC cards (either class 4 or 6) rather than a 64GB one?
Click to expand...

Only if two 32GB cards cost less than one 64GB card (which is usually the case, at present)


Serafita said:
Is there any real difference between class 4 and 6 (or higher) when it comes to the Pandora and SDHC cards?
Click to expand...

The write speed doesn't matter much for playing games, since the game saves are usually only a few KB.
Last edited by a moderator: Dec 17, 2015

Stay away from peak hardware!

I will always use Kingston from now on.. My 16GB class 4 is performing very well
C

To partially back what Spirit said, I had an ebay purchased 16gb class 6 A-Data card prior to Pandora and it fried really easy in just removing from a laptop and back to a camera. They were good enough to replace it for free without any receipt though and it currently works just fine with Pandora. I've also used San Disk UltraII and another A-data 4gb card without any problems. Whether their cards are worse than others is debatable but they certainly honoured their warranty in even poor circumstances, so I respect them for that.

Serafita said:
Is there any real difference between class 4 and 6 (or higher) when it comes to the Pandora and SDHC cards?
Click to expand...

I haven't been able to notice one myself, with what I do (specifically, playing my old games, and editing documents, most of the time).

Planning to go with Kingston or Sandisk at this point in time. :3 I should also mention I'm in the UK, so any reputable sites which might be doing a good deal would be handy too, haha.
Click to expand...

Amazon UK and Play.com tend to have the best deals (it's probably worth avoiding third-party sellers on both, however, as fakes have been known to pop up via this avenue once in a while), with Amazon being more competitive at this time. I would highly recommend the Verbatim 32GB Class 6 cards, personally - they were about £65 from Amazon the last time I checked (which was/is less than Play.com are charging for their own-brand 32GB Class 4 cards).
Last edited by a moderator: Dec 17, 2015
P

Could the people that are using 32Gig and 64Gig cards (or any size card for that matter) please post their success's?
Possibly accumulate them in a Post near the start of the thread?

Here is what I can tell you:

Panasonic and Sandisk are the best. If you care more about reliability than price, be sure to get one of those.

A-Data is one of the worst. If you get an A-Data card, it may never have a problem. However, it is more than likely that you won't have such a good experience with an A-Data card. I have been with these forums since the GP2X first came out, and seen many, many topics about faulty A-Data cards.

P0lyM0rpH said:
Could the people that are using 32Gig and 64Gig cards (or any size card for that matter) please post their success's?
Possibly accumulate them in a Post near the start of the thread?
Click to expand...

I can do it, if this forum allows me to edit my posts even after a time delay. :3 Would be handy, anyway
Last edited by a moderator: Dec 17, 2015

I bought two of these TOPRAM 32GB cards. 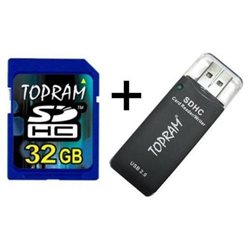 HERE
The cards I received are black. They look good and work good in the Pandora.

I have a 64g SANDISK SDXC (class4) card in my Pandora right now, it works very well, got my entire music collection on it, and a 32gig version (also SANDISK) for games and apps and so on .. a Very Nice setup now ..

I will always use Kingston from now on.. My 16GB class 4 is performing very well
Click to expand...

Sorry for the gravedig, but can you please confirm that this card works well on the Pandora? The reason I ask is that the wiki now has a SDHC compatibility list. Gruso has reported that 16GB & 32GB Kingston class 4 cards do not work on the Pandora at all. (I don't know where the original discussion for that is... I assume somewhere on the other forums. There's a bug report over here)

P.S. Anyone who can help out with info for that list - would be appreciated. If your card works, please say which file system you're using: fat32 or ext2/3/4.

^ I have a couple of 16GB Kingston Class 4 cards that work fine. The problem is this: Kingston is a restickering brand - they do not manufacture their own chips, so you have no idea what you will get with any given card.

That is to say, I'm afraid it's completely impossible to confirm for you whether Kingston's cards will work or not, because it changes per card.

As an aside, it's very difficult for me to add anything to that list, so I won't be able to. For example, I have one card where I've had some problems with file corruption no matter what format (ext2 or FAT32), and yet most of the time it works perfectly well. That list is too rigid to be able to add cases like this to it! My understanding is that the card is not the problem, but the Pandora's SD Card drivers.
You must log in or register to reply here.
Share:
Reddit Pinterest Tumblr WhatsApp Email Share Link
Top