Why not to by GPD

I wanted to like this company, I really did, but after purchasing 3 of their devices- and having 4 faulty ones- I'm ready to say that their products are too low-quality to merit purchasing.

I've bought the GPD XD, the GPD Win, and the GPD Win 2 in that order. None of the devices lasted me more than 1 and a half years (the GPD Win was the only one that lasted more than a year).

The GPD XD just quit working one day. I got off a flight, turned it on while I waited for my bus from the airport...and nothing. Didn't turn on, didn't charge, no leds or screen lights, nothing. I asked online and some said that I should be able to replace the LCD ribbon...well, the low-quality plastic case had started coming apart for no reason, so I glued it together. So taking the case apart for repairs wasn't an option.

I purchased a GPD win because the reviews I read said the build quality was much higher than their previous products. And it was fine until it suddenly stopped charging. I did some online research while it was plugged in, then the next morning (it was plugged in all night), it wasn't charged. It never charged again after that. The GPD Win that stopped working was my 2nd win, because I actually live in China, so I went to the Shenzhen HQ of GPD and personally bought my first GPD Win....and at the Headquarters, they placed a faulty device in my hands. I got home and the GPD they gave me instantaneously blue-screened as soon as I turned it on. I messaged the company, and got the new one that lasted me for a year and 2 months.

I decided then that I was done with GPD, their products simply weren't high enough quality. It just wasn't worth dropping more money on 8-14 months of useful computing.

The GPD Win 2 got great reviews, it was better, higher quality, solved many of the problems of the GPD Win original...so I bought one. 8 months later, the lcd ribbon on this one also broke one day for no reason. I didn't use it for a few days, picked it up, turned it on, and when I opened it, the screen turned off when I opened the device more than 45 or so degrees. It still works...if I keep it open less than 45 degrees. Yes, I opened it and re-seated the lcd ribbon...the problem persists.

I bought these devices because I travel a lot, it's nice to have something to game on when I'm in transit, and take notes on when I'm in the field, but frankly, the devices aren't reliable enough for me to put trust in anymore. I want to support their company, I love what they are doing, but dealing with their low quality isn't worth it for me.

When I got my first GPD Win, I made a pole on Reddit, and something like 70% of the people responding said that their GPD Win had a hardware fault of some kind- touchscreen issues, non-working LEDs, etc. Only about 50% of the problems left the device usable, but 20% made it unusable, like mine. A product where 70% of its owners report problems is unacceptable.

Long story short: GPD's quality control isn't high enough. I've had multiple products and none have lasted more than 15 months. Save yourself the trouble, don't buy their products.

I do understand you.

First i was realy happy about a Device like the GPD Win
and i got one from my Brother but:

And thats why i want a Pyra:
Pyra=
-Heat Problems?
(no more more because efficient passive Cooling)
-Bad Keyboard?
(not here because the Community has designed it)
-extremly slow EMMC?
(you can use up to 3 SD Cards for the OS)
-realy sharp Edges?
(The little bigger Device is much more Comfortable and all Edges are good rounded)
-the Noise of the Fan?
Which Fan here?..lol
-Build in Battery?
(Nope you can simply switch the Battery here)
-only a few Connectors?
The Pyra has many many more Connectors.
Even Sata and more USB Ports that you can use.

With the Pyra you will have an active Community which help with your Problems here.
The CPU Unit on the Pyra is Upgradeable and with newer CPU Boards you will have a Device ready for the Future.

I know why i want a Pyra

Whell i even tryed Games like GTA 4 or the Farming Sim 2014 on my GPD Win, and it ditnt got that hot,
Somethimes its a bit slow, and the Internal Storage is much too smal, but gaming wise, its works pretty good..

Ok i have to say, most of the Games i played on the Win are old ones from GOG, or some Games i also played on my Windows 7 Laptop from 2011,
I finished Edna and Harvey the Breakout, and have also some of the other Dedalic Adventures like Deponia on the Device and its works pretty good for they..

The thing that stopps me from using the GPD Win as a Every Day Device was the Shitty Windows forced Update, and i was unable to find a Emulator for PSX Games,
There are 2: One Loads the Games whery well, but the Keymapper ditnt work, and the other lets me mapp the Keys, but dosnt load the Games..
N64 SNES NES GB GBC GBA worked pretty good..

And the Win runs Rigs of Rods, so this means, driving Unimog Virtually whyle you drive an Unimog in Real Live ^^

The Keyboard is indeed not that good, and yes, this Fan is pretty loud for such a tiny device, and dit i meantioned the Forced Updates??

Im sitting on the Waiting Area on the Hear Studio (Frisuer), whants to play some Tetris on my cool Windows 10 Handheld, but have to wait untill the Cut was done because my GPD first have to config a new Windows 10 Update..

Aktually i use my Win as my Work PC in my Office until i have my Pyra,
Its sitts on a HDMI TV, whit a USB Keyboard and Mouse, and works pretty good,

The GPD Win has many faults, but I really enjoyed playing many games on mine until my battery failed. I still hope to find a decently-price replacement battery so that I can use it again (and I hope that the custom expanded lower case I bought will lower the heat the battery takes and make it less likely to fail). I got lucky with my unit, other than that battery issue, I've never had any major problem with it.

I agree that GPD has trouble with their quality control and wouldn't buy a $600+ device from them. But currently the GPD Wins are the only solutions for windows gaming on the go.

A free grammar check from a german guy with terrible grammar:

Ingo:
The device is a little bigger, *but (it) is much more comfortable and all edges are *well rounded [well instead of good]

The Device Runs a Game in which you can Drive a Unimog, so it’s can’t be that bad.. (Farming SIM 14)

matzesu said:
The Device Runs a Game in which you can Drive a Unimog, so it’s can’t be that bad.. (Farming SIM 14)

Whe need a Game for the Pyra in which you can drive a Unimog
Click to expand...

With some radio equipment, and some industrial-surplus control gear, I don't see why there shouldn't be a utility on your Pyra that allows you to actually drive a Unimog!

Binky said:
With some radio equipment, and some industrial-surplus control gear, I don't see why there shouldn't be a utility on your Pyra that allows you to actually drive a Unimog!
Click to expand...

As a remote vehicle controller is a potential device application for the Pyra. The nubs & gaming controls & shoulder buttons and touch screen actually all lend themselves to it. Essentially, emulate something like this:

I can’t imagine a
Remote System that can shift one of these: 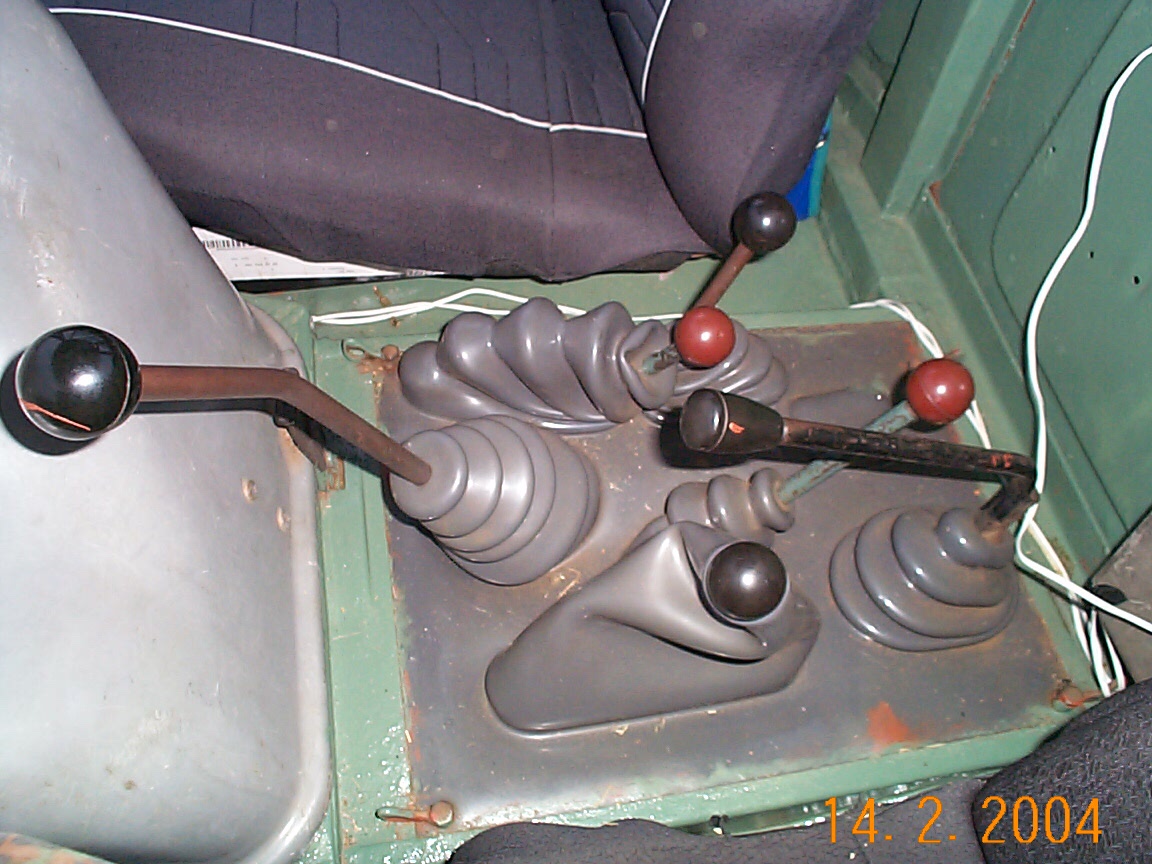 I love my Win, I just wish the keyboard was more like the Win 2's, and I wish the screen was natively landscape instead of rotated portrait. These two problems can be worked around, but not as easily as they should. I actually hav a 500GB M2 SSD in a case I have adhesive velcroed to the screen and works on the USB port so storage isn't an issue.

I do really want a Win 2, but I can't afford the $1000 price right now. Heat is always a problem and mine has its own quirks (The HDMI port is damaged but I bought it used, and sometimes it doesn't want to power on after holding the power button for 3 seconds - I usually have to hold it for at least 8), but I still love it.

crazyhorse said:
Is the OP ED?
Click to expand...

Since the OP is living in china, I'd hazard a guess at no, otherwise ED owes us some explanation

Its a shame really. Theres so many people out there producing a device that ALMOST meets my desires. Even the Pyra isn't 100%. But I looked at GPD stuff and its so darn tempting. I owned a GPD-G5a and it was an absolute disaster. Worst device I've ever owned. But I figured hey that was probably just a bad unit, so I get my wallet out to plunk down the money and then I read stuff like these and I shy away.

matzesu said:
I can’t imagine a
Remote System that can shift one of these:
Click to expand...

Install hydraulic actuators on the clutch, brake, gas, locker actuators and two on the main shifter for X,Y. Link those to a solenoid valve control box - then that to a radio receiver. Might want a few sensors in there so you can know the positions of them near real time, but that's excess. Don't forget the all important 'dead switch' so that if it looses radio contact it defaults to killing the engine, clutch out and brakes on 100%.

matzesu said:
I can’t imagine a
Remote System that can shift one of these:

Why are there so many gear levers?

levi said:
Since the OP is living in china, I'd hazard a guess at no, otherwise ED owes us some explanation
Click to expand...

Silent-Hunter said:
Why are there so many gear levers?
Click to expand...

Never drove a unimog, but I venture a guess only one of those is a gear shifter, the rest is likely 4 wheel drive, differential locks and what not.

TrashyMG said:
Never drove a unimog, but I venture a guess only one of those is a gear shifter, the rest is likely 4 wheel drive, differential locks and what not.
Click to expand...

Makes sense! After reading about them, I suspect one is shift, one is range, one is reverse, one is how many wheels are engaged, one is the 'crawler', and I don't know about the sixth one.

The big Stick on the front is for the shifting of the gears like on a normal car, the stick on the left is for the 2 tool drive ports front and back the Stick in L Shape is four wheel drive and Divererential Lock
The 2 Sticks whit the red handle are for drive pretty slow
And the Stick on the right rear side is for reverse or forward

It’s sounds pretty complicated but I only have to use 3 of the sticks for our usecase
You must log in or register to reply here.

A
GPD win (first one) LCD cable, where to buy?