If this thing actually makes it to market, I'll consider getting one. If they can get decent battery life at that size, I will be amazed.

maybe it's the PGS's fault, but pitch videos that avoid showing a working (aka stuff on the screen is happening after user input) prototype while the campaign description states that they have one creep me out a little.
aside from that (and the bump on the lid, ugh), nice little machine i'm happy that pocket pcs get some attention. maybe at some point people won't ask "hey, is that an old DS?" but rather "huh, what brand of pocket pc is that?" when i use my pandora in public

jeeks said:
maybe at some point people won't ask "hey, is that an old DS?" but rather "huh, what brand of pocket pc is that?" when i use my pandora in public
Click to expand...

I actually like the fact that people think it's an old DS, it's less likely to attract thieves and muggers.

Looks like once again, most backers are from Japan. The GPD WIN, then the GPD Pocket now the Gemini.

As I said a little while ago, ED better get some marketing plan in place to advertise to the Japanese

oo, linux. maybe instead of a mouse, they only offer desktops which don't need mouse functionality (i3, ratpoison, etc.)

ElPoco said:
I actually like the fact that people think it's an old DS, it's less likely to attract thieves and muggers.
Click to expand...

okay, that's really more a pro than a con, but still... i want to show off my cool multi purpose machine and people treat it like the thing i store in the back of my gaming drawer (actual location of my old DS) :/
S

vcoleiro1 said:
Why do you need a fully charged battery before transfers How much data transferring are you planning to do in one session?
Click to expand...

Or set up and SFTP/FTP server in your house with a pi and never use usbs again.
S

Swordfish II said:
in your house
Click to expand...

In my house I have a Desktop PC with a mechanical keyboard hooked up to a 24" monitor and a 46" TV.
That's not where I intend to use my Pyra.
S

sulu said:
In my house I have a Desktop PC with a mechanical keyboard hooked up to a 24" monitor and a 46" TV.
That's not where I intend to use my Pyra.
Click to expand...

I have used my SFTP (in my house) from across a country and across an ocean. It has TBs of stuff on it accessible on any of my computers, anywhere, at any time.

You are being a bit obtuse honestly.
S

Swordfish II said:
You are being a bit obtuse honestly.
Click to expand...

Oh really? Then maybe you can tell an obtuse guy like me how to access a remote server without any network connection.

Let me guess:
All you do is to commute from one warm room to another with constant access to electricity and internet. You've never been farther away from a landline or cellular net more than a few kilometers and "nature" is something you associate with (national) parks, commercial timberland and tourism.

If that's about right, I'm looking forward to your suggestions!

sulu said:
The Pyra's 3 USB ports + charging is a real killer feature in my book.
Click to expand...

I could totally accept the lack of ports if one of those devices would have a dock that provides the additional USB ports, powers it and connects it to a monitor.
The main reason I was interested (and backed) the UBUNTU EDGE.

Price seems to be pretty good, especially for a non-Chinese firm. I (previous Psion Series 5 owner)really like that keyboard and I also like the dimensions of the device.

For now the GPD pocket is still my first choice though. Larger screen, Ubuntu support and will be created by a company that already has proven to be able to deliver (planet computers who are they?).

Sounds like the keyboard design isn't really finalised, from that interview published today. The prototype they're using has the keyboard ripped out of an old S5MX, and the design in the photoshop mockup looks very reminscent of that.

Weirdly, I can't get the igg page to load at all well, even after enabling all my bells and whistles. I'm wondering what sort of campaign this is - it is one that protects your money if they don't reach the target, or do they get the money regardless?

A fixed goal of $200,000 - not sure what to think of it. The venture behind it doesn't seem that experienced as a team, always a risk to pre-order then.

ekianjo said:
They said you can boot Linux. How is that not a desktop experience?
Click to expand...

Booting and running are 2 different things, as Linux is quoted as a 2nd OS it may not get a 100% working version.

This on the indiegogo page doesn't fill me with confidence either:

*We are working hard to achieve the above technical specifications for Gemini.


When further down they state:

"We have a fully functioning physical model of the device and have identified the mobile hardware platform that is based on the Mediatek Helio X25 processor and the Mali GPU."
M

After using the Pandora so extensively and getting accustomed to it, I'm these days undecided about which I prefer: A keyboard designed for thumb typing in your hands while you're standing up, lying down, etc. or a keyboard designed for use on a surface you're sitting or lying next to. Compared to the Psions, Palm devices (with graffiti) were totally liberating if you wanted to write something standing up. So were the old Ericsson phones, though they had issues with handwriting (the R380 was great... when it didn't crash...).

Judging from the photos this new Psion continues down that typing-on-a-surface route: Thumbing is simply not what it does, thus you probably find a surface to place it on before typing. One handed typing can also be tricky (or rather risky to the device, more often than not). The way the device is being held in the photos really just instantly takes you back to late 90s and early 2000s . Especially the "lying on the sofa"-picture where the pinkies basically take the full weight of the device. That posture is just soooooo IT!-)

The Pandora works better in this regard - I often use it standing up or lying down. Having Fn and Shift in the triggers (forefingers) is also cool. It sits steadily in both of your hands. But the moment you start to actually type on a flat surface using more than thumbs it all breaks down a bit and thumbing can never be as fast as typing with 6 or even 8 fingers. After using the Pandora with 4 fingers (forefingers+thumbs) this long I definitely believe now that "2+2 is more than 5" (single hand while the other holds the device).

I must admit I hovered my mouse over the "Get this perk"-button for a time long enough to be downright scary this time!
If I didn't know about the Pyra, it would have been a done deal.
I hope I can resist until the best perk is gone.
The main issue here is lack of details when it comes to supporting linux. It is clearly a "bonus" instead of one of the primary features - that it also probably why the creators aren't too concerned about the lack of a pointer. Android doesn't support them that well anyways, so it's more important to have a 20+-point capacitive touchtoy layered with hard plastics as the display than a little red nub in the middle of the keys.

I thumb-typed handheld most of the time when I had a working S5MX - if they keyboard is that good it should be workable in both scenarios (unlike the Pandora one which works well for thumbing, but is not really set up for touch typing with your fingers).

Pages only update every day though

I'm always for more mobile devices.
$200.000 for a new device sounds quite cheap, do they not need to be totally funded or are they hoping to get millions even when asking a lower priced goal?
I myself would be cautious when getting an item like this, doesn't mean it isn't real but I get triggered when stuff sounds good but might be hard to finish.

Something about the Gemeni's physical dimensions pictured for this device don't add up. An 8000 mAh battery pack by itself is about the volume of the overall device. Throw in keyboard, processor, screen, case and you're closer to the thickness of a Pyra.

With these additional devices popping up, it would be a very good time for @EvilDragon and team to show a fully assembled (with heat provisions), running, Pyra prototype. I.e. show that it is very near to market and get some publicity rolling behind it. There hasn't been a news worthy article on it in a very long time. The Pyra has lost the news buzz. The best way to get it back would be demonstrating working hardware ready to go into production. Not that it should be rushed, but what is left to do?

Having more clam shell devices in the market should be interesting. The Pyra will get press coverage simply by getting included in spec comparison grids with the GPD Win, GPD Pocket and Gemeni. It won't look great in those comparisons though unless the grid includes check boxes for equipment and capabilities that the Pyra has that the others do not.

Back to the Gemeni, I like the overall concept. Inclusion of a microSD slot is a good step. The more standard typing keyboard is OK, but they're going to need a lot more labels to handle Linux desktop usage cases. Lack of a pointer control (trackpoint, nub, touchpad, trackball, other) is a substantial oversight. I seriously question if the stated dimensions are possible with the stated battery capacity. It looks a lot like the PGS campaigns where there isn't a working prototype and they haven't really figured out yet how to cram their 10 lbs of shtuff into their 5 lb bag. Pretty renders, aspirational dimensions, running a campaign for funding too early.
M

I'm both intrigued and skeptical even if the people making it have a track record.
Cause yeah 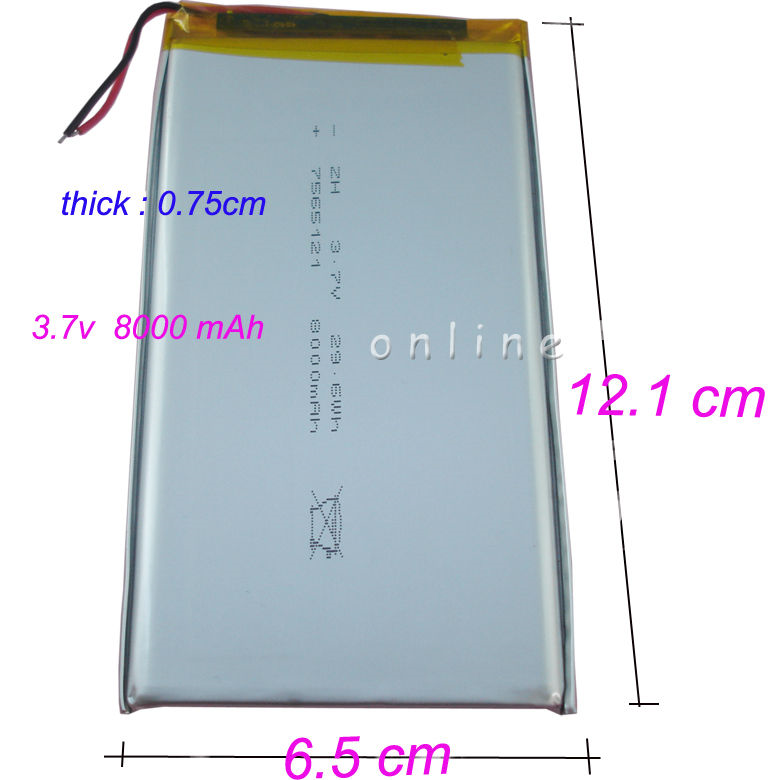 The full height of the device closed is 1.35cm, your average 8000mah battery seems to be 7.5mm thick.
So there's a 8000mah battery, where are they putting everything else? 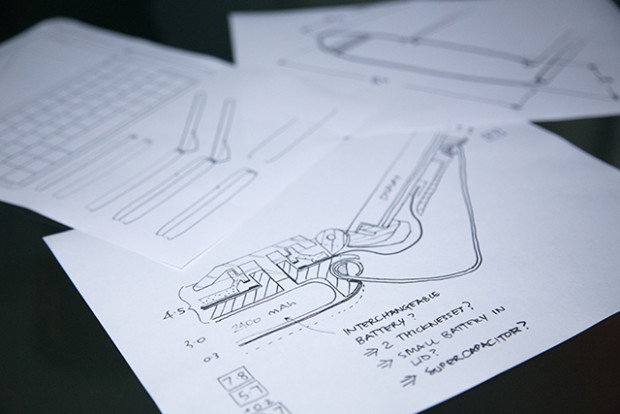 Not entirely sure what to think of this sketch.
Using different sized batteries don't really mesh.
Supercapacitors, really?
You must log in or register to reply here.