I'll start us off with:

As far as heat goes I'd rate it at about a medium. There's a pronounced wasabi taste which I like but it also tastes strangely sweetish which I'm not sure that I'm entirely fond of. Overall it's not bad but it's not one of my favourites.


Excellent quality (detailing and paintwork), well worth the money.
Last edited by a moderator: Jun 16, 2015

and we're back to miku pictures....

I collect Hatsune Miku stuff, deal with it.

Been buying mostly food, and not much else.

Review:  It is keeping me from starving to death.

In recent months the following were purchased by or for me: 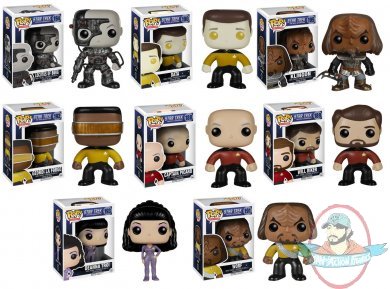 Review:
I have all except the Klingon that isn't Worf, and we are trying to decide if we want him so that we have the whole set.  I found it odd that all of the males have the same body.  I was surprised there were none in science/medical blue, then realised that TNG doesn't have many major characters that fall in that category.  So much for them being primarily explorers.  I considered painting Picard's uniform blue as it was in the episode where Q allowed him to change some of the stupid choices he made when younger and he ended up never really standing out or doing anything noteworthy (If only stupid decisions always truly lead to greatness...).  Maybe they could have put Troi in her uniform.  I am wondering why Doc Crusher wasn't included (she was also not included in the Pez set that included Locutus, but was in the standard set).  They could have put her in place of the Klingon.  I am glad there is no Wesley, and would have liked if they had included O'Brien and Barclay (because everyone knows Engineers and such are the most important part of the crew/show), or more women, like Guinan, Lwaxana Troi, and Tasha Yar (although these are based on later in the series, so she would be out of place unless she was Data's little projection of her).

At present they are on a shelf, with their dead eyes (yes, Geordi too, even if you can't see them ) staring out.  I notice that Riker seems to have quite a tan, and Troi (or would that be Mrs. Riker now?) is the palest after Data, whose face looks a bit too pink (might be the light in here), and doesn't match his painted hands.  I think Riker should be paler than Troi.  There are no major paint issues, but a couple little things could have been better, such as paint on the top of where the mold expanded out for Riker's beard.  I am happy with them, even if they look a bit odd, due to the eyes and massive heads (made worse with the tiny body on Troi) that are a trademark of these figures. 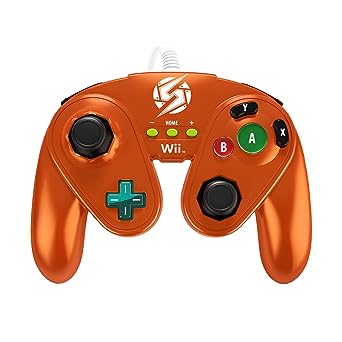 The controller itself is more of a metallic orange on top than the picture on the box would suggest (I think it made it look more red, like her helmet, but it is actually orange, just more of a red-orange than coppery like the Varia Suit...see below to compare colors). I am a bit concerned about the longevity of the paint on top due to the rough texture.  I don't know what color the plastic under the paint is.  It may be yellow like the bottom, or there could be a coat of yellow paint under the orange, since there seems to be a more yellowish tinge on the main body around the upper edge of where the sticks/d-pad/buttons are, and in the little detailing area around those sections.  The paint is the typical kind used for a metallic look on such things (think GBA SP, or Platinum Pandora cases) and mine already has a few minor scratches.

I like the white logo, but wonder if another color would have worked better.  I do think the cable should have been a different color, however it looks like all of the Wired Fight Pads have the same white cable.  At first I questioned the black X and Y buttons and sticks, but the rubbery sticks make sense and remind me of the areas around joints such as near the hips.  X and Y could have been the same green as the center three buttons.  Those three buttons work very well as the minor complimentary color that I most love from the suit.  The d-pad is chromed and blue.  No problems here yet, and it looks nice enough, but I have had the chrome come away from the plastic on other things made like this.

The bottom has a clear slick coating over a textures metallic yellow.  I like this look, and it feels better and more durable to me than the top half.  There are a few rough spots where the textured paint can be felt coming through the clear coat.  In the screw holes I can see that the plastic seems to be white (so maybe there are 2 coats on the top half).  There is a sticker on the back of where the C-stick is located that has a part number, some symbols, "Made in China", the address to the PDP website, and "Wired Fight Pad" with SAMUS in bold on a red background.  All text and symbols are in white.  My sticker is slightly off-center.  The L/ZL/R/ZR shoulder buttons are all the same color and plastic as X and Y.  I will let you read about the ZL/ZR feel elsewhere, but they do feel a bit "deep" or long, however I don't find that they interfere when I am using it.  The slick feel of the clear coat is more likely to be a problem for people, in my opinion.  If you don't want a controller with a slick underside (maybe you get sweaty hands) you might consider one of the other character themes that isn't so slick.  I don't think Samus would let a minor thing like slickness interfere with what is going on, so why should we? 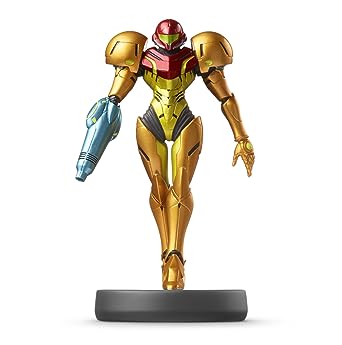 Review:  As I mentioned above, I am a Metroid fan.  This is another cheap and usable item, although right now it is just sitting on top of a tribble looking nice.  I could use it to get a Varia suit for my Mii in Mario Kart, or do whatever you do with them in SSB, but I haven't played any Wii U games recently.

If you haven't noticed, I am picky about details.  The Samus Amiibo is one that has a lot of inconsistency in quality, so it took me a long time to find one that I was content with.  It still has some minor paint issues, but most things are bold and bright, and look decent.  The Samus ones tend to lean, some a lot more than others.  Mine leans very slightly to the right.  Not much more to say here.  Make sure to pick one out in person if you care about quality. 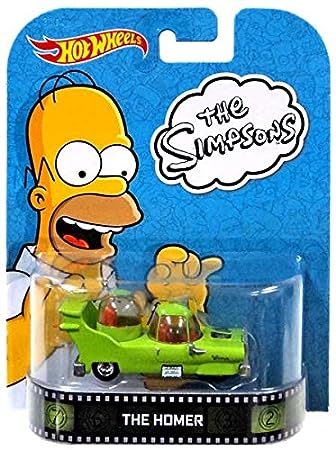 Review:  It looks like it was designed by an idiot with free-reign over all decisions and no one questioning anything or telling them "NO!".  In other words, excellent.  I like the color.  It seems there are 2 package designs for those that care about such things.  Mine is in the above packaging (although I usually open or play with my toys).  It is sitting between my Ecto-1 model and my tribble.

Can we include things we are trying to buy, or is there another thread for that already?
Last edited by a moderator: Jun 12, 2015

Gee! your Miku stuff is quite expensive. I'd rather put my cash somewhere else...


rygD said:
an idiot with free-reign over all decisions and no one questioning anything or telling them "NO!".
Click to expand... 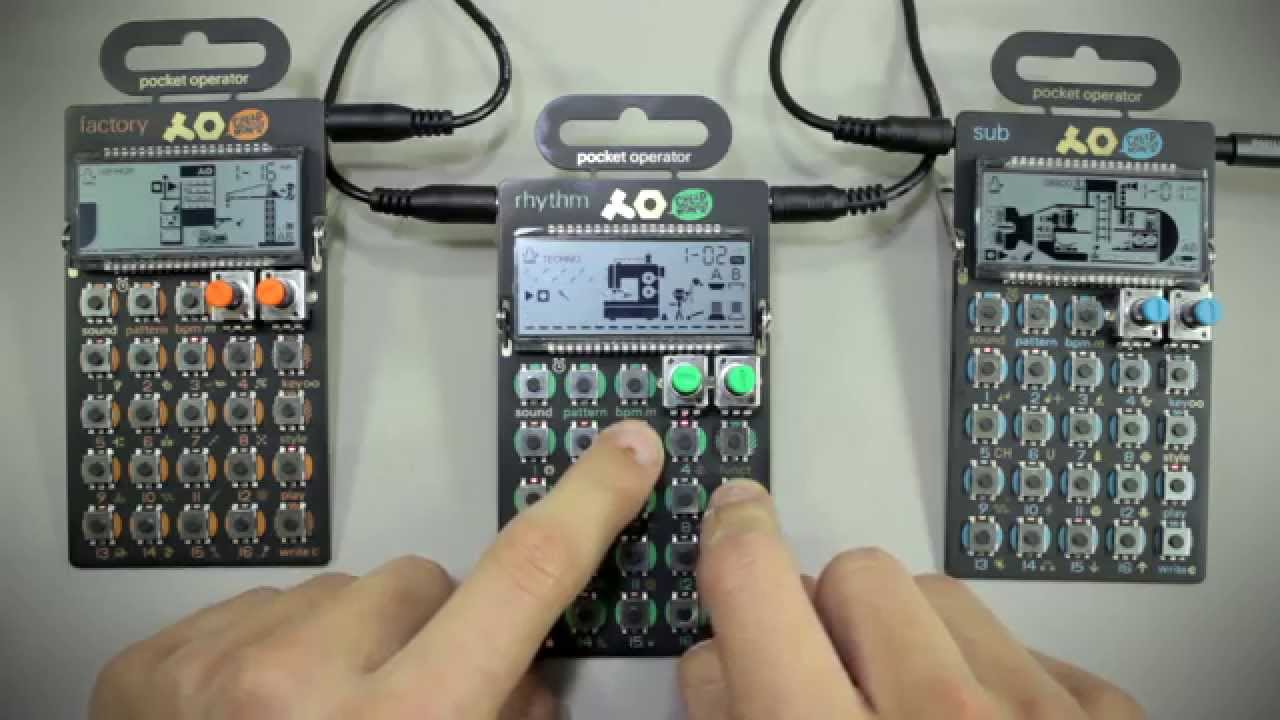 The fluffiest of all.

Can I hear the results?  I don't share what I make, so I understand if you keep it private.  They seem a bit pricey for what you get to me, but I am a bit interested in them.  If I get lucky there is a synth I will be posting ITT in a few months.

rygD said:
Can I hear the results?
Click to expand...

posted a soundcloud link with some previews from the guys who made them at the bottom of my post, but apart from that it's only my second day with them and I'm still getting the hang of them. They are very quirky devices indeed. that being said, I've done some proper banging loops on them already (well the PO-12 hasn't arrived in the post yet, been using my volca sample as a drum machine - another bit of kit I'd highly recommend), the po-14 bass machine produces some sick sounds and I reckon the 16 could do too (just haven't got them out of it yet - out of the box it sounds very cheery and mario-esque).

Give me a few days and I could upload something just for you
Last edited by a moderator: Jun 12, 2015

If you want details.

oh and lots of:

I would like a review of this, or recommendations for others.

rygD said:
Can we include things we are trying to buy, or is there another thread for that already?
Click to expand...

I don't remember there being one, so feel free to do so.


ekianjo said:
Gee! your Miku stuff is quite expensive.
Click to expand...

It seems to do what it says. It heats up quick, switches off when it's in the holder.

What I bought is a re-branded model of what is shown here, but Mr Dave Jones himself reviewed it in one of his tear down videos.

A few bottles of this

Its like cola, just with half the sugar and twice the caffeine.

Then new skates, just as a part donator.

Oh and a new bicycle tire, i havent had a bike for years but i found one laying in the road ditch. Makes a hell of fun.

Also: New camera, Zeiss/Voigtländer vitessa 500. My 20th camera or something like that.

And as last: Walnut bread. Omnjomnjom.

I'm going to be ordering a new mattress because of the following incident
Last edited by a moderator: Feb 8, 2016

Freaking Steam sales are impossible on their own, but now GoG has to have one at the same time too...*sigh*.


I found the stories entertaining and the ghost hunting tips that they gave seemed pretty useful. Would recommend picking up a copy.
Last edited by a moderator: Jul 5, 2015