Hello Fellow pandorians, I decided I wanted to test out if I could have a portable TV again.


I bought a dvb-T at the store, called dvbtusb2, and then went to work.


So our first step is to plug in the usb-dvb, and use "dmesg" on the commandline to see what we need, then download the firmware from:


In my case, I just required dvb-usb-it9135-01.fw (and thanks to the quality of the Pandora image, the rest just works. Thnx Notaz!)


I tried to compile them myself (but couldn't "make" on the pandora due to a missing Usage.pm in codeblocks, instead of getting it to work there (using cpan), I compiled it on my Linux workstation instead, and also used w_scan there to generate the xspf file, which just was copied over to the OpenPandora). Still, if you want to do it yourself, here is the link:


The -t 3 was important, without it, it did not find any channel (although scanning took longer).


Finally, as root, copied the single fw file to  /lib/firmware/ and it worked. Quality is good, despite the small antenna. Good framerate, small chroma distortion due to resizing to fullscreen. Did not really need the VLC post processing for deinterlacing, even though the snapshot looks like it could use it, in motion it goes unnoticed. Colours are beautiful, but that's just the quality of the Pandora LCD. A bit lack of bass in the audio, otherwise, clear audio.


In the train, there are still some moments where image is lost a bit.


VLC can open the xspf files, and channel switching takes less than a second. In the details you can see the programs for up to 2 days. And you can enable subtitles for TV subtitles. VLC also has lots of effects, like being able to rotate the image.


The usb stick and antenna are small and lightweight (see picture). The base of the antenna does not fit in the OpenPandora case, so I have to carry it in my pocket. It does not get scorching hot like the hauppauge930C and... it does not consume "that much" either:


Thus, the advertised power consumption of < 500mA is true. 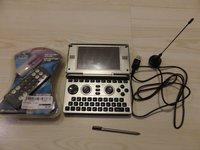 This is great, Just Nederland 1,2 and 3 though right?


I noticed Velleman isn't selling those anymore, where did you get yours?

Bought mine at http://www.muco-amsterdam.nl/ you can call them and ask if they have more.


It is an electronics store together with RF toys (some sweet quadcopters... sigh... need to save up for Pyra, else #eatingdirt). They had some breadboards, and real soldering equipment (always nice to see). Also bought a Velleman Solar Energy experiment kit... excellent gift. and an led strip...


But they didn't have a pen to repair traces, nor pieces of trace to fix my PC keyboard. I have it on backorder now.


Yes NL1,2,3 and TV NoordHolland (in Amstedam). And some radios. Just look in the xspf file attached in the op.


This post made me try again with my old dvb-t tuner (a cheap chinese one) with an af-9015 chip.


After installing the firmware for my tuner (dvb-usb-af9015.fw) i have a recognised dvb-t stick with Pandora


Next i try with compiling w_scan but the latest source need an updated dvb api (>5.3 while on pandora have only 5.0) so i searched for an armel package and found this


https://packages.debian.org/jessie/armel/w-scan/download that is for debian jessie and it run correctly with pandora (is a 2013 revision of w-scan).


The only bad thing is that my tuner didn't find a channel ( i have tested with the mini antenna and with my cable antenna that i have at home).


I have used the string

@Farox: Location, location location. Stand next to a window. touch your antenna to a waterpipe or something metallic like stairs. Go stand higher.


Your package is golden. I just took w_scan from the deb and ran that... and it works. Try leaving out the landcode, this worked for me (although I got the full list of available channels, also the non-free ones):


However, VLC did not want to open it, because of the page encoding (Belgium has a channel called "één", which needs to be edited to plain ansi for VLC to like it).


@EightBit: Went to the store, it was the last they had. Sorry! However, if you want to play with it, I can lend it to you, just pm me.

FBnil said:
@EightBit: Went to the store, it was the last they had. Sorry! However, if you want to play with it, I can lend it to you, just pm me.


I looked the unit up, there's several shops selling it online so I'll get one from there.


Thanks for the offer though


the number of cables, USB stuff etc. is growing out of proportions, my super portable now comes with a suitcase filled with accesoires! lol

>>I thought Muco had gone bankrupt or something


No, they got robbed one to many times and decided to move the shop. And although next to a subway station, it is not a street that has many shops.


haha... same here. I've got this plasmaball, a microscope, a phonehorn, camera, ethernet, a tv usb,  a 15-in-1 card reader (to read all those obsolete formats), usbhub, I even bought an audio splitter so you can connect two headphones at once.  I have given up on my old GPS. event got some solar panels, so I can charge it, but you need like a few weeks of sunlight to fill it up... not worth it.


And I'm still looking for an ODB device (I have ODB1.2 but with ODB2 connectors, and that combination does not exist...). Ah... a holder for on the windshield, with a very big suction nap. And other stuff that gets lost, like a USB light and such. Do you know: http://www.everythingusb.com/gadgets.html It has an USB powered polen mask...


@Farox: This original thread also has an alternative way of scanning. Did not try this now in 2015 (but back in the days it worked for me). https://boards.openpandora.org/topic/404-dvb-t-tv-on-pandora//URL]
Last edited by a moderator: Feb 6, 2016

ps: During the period Dec-Jan, the encoded channels were transmitted as non encoded in the Netherlands. I think this is a recurring thing, so I hope it happens again.
If you are German, head over to zattoo.com for internet streamed channels (after free registry, some channels are free). Too heavy for Pandora, I am afraid.
Dutch have uitzending gemist.
You must log in or register to reply here.

L
The Pandora And Usb