I had a leather holster made

Though I think only rockbox supports using the shoulders for this purpose.
Click to expand...

Ah, Rockbox does?
I did not know there was a player. That's the only real use of my aditional 4 shoulder buttons. They're + and - so deadbeef recognizes them

Deadbeef can probably be configured. I've configured mine to use d-pad left and right combined with the shoulder buttons (as shfit/ctrl) to skip forwards and backwards (which is useful in multi-hour podcasts sometimes), and I've put next/prev track, play/pause/stop on the keys starting Z because my LCD is broken so they're the only real way of pausing podcasts when I need to, for example.

I'm just not 100% that deadbeef can accept shift/ctrl inputs alone - I've not tested that.
?

awesome! If I had any spare money right now, I'd buy one.

YES! We need a black and hot pink fanny pack. Give it an inner pocket in the main pouch against the body to keep it from flopping around inside.

The holster is nice, just a bit pricey for me. I do think it is worth it, so we'll see after I get my Pyra.

Yeah, me too. But I want the Pyra first.
L

I have one such bag for my Pandora (no clue where I got it) in which it just barely fits, meaning the Pyra will be too big and it's just thin fake leather anyway, so this would be great to have! So mark me down for one in brown.
I was hoping it would be one of those you strap on over your shoulders to carry your pistol, alas..

Was going to start a thread about this very subject in the Pyra section.

A good friend of mine (in the UK) is something of a master craftsman when it comes to hand made leather stuff, pretty sure he could make an excellent case for the Pyra.

@Eight Bit : Would it be OK to post examples of his work here and go into a bit more detail or would you rather I started another thread?

Ofcourse, go right ahead. Anything to come up with the best solution. I'm just happy I finally found a guy that wanted to do a job like this 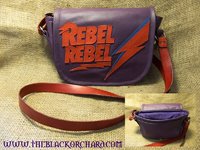 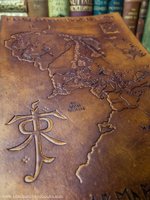 As mentioned, a friend of mine, based in the UK, is a highly skilled craftsman when it comes to custom made leather goods. Shown above are some examples of his work.

He'd be able to make a case / holder for a pyra if people were interested.

What would be good is if we could formalise a general design brief so I can put it to him and get a quote.

My design proposal would be to go for a flexible solution, where the case would have a belt clip as well as fittings for a thin strap (could be either shoulder or wrist strap). The case should offer full protection with a flap for the headphone socket (and possibly power & shoulder buttons?)

A small internal pocket for flash media, or perhaps a cleaning cloth, would be a good addition IMHO.

There would be an option for a hand tooled pyra logo or perhaps more appropriately the logo could be burned onto the leather via pyrography.

After 2 months of usage, the main thing I would change on my Pandora case, are the holes for the shoulder buttons. I thought I would, but I don't use those at all. I'd remove them on a revision I think. Maybe it would be different with the Pyra as it has 4 buttons which might make it a little more usable for controlling a music/video player but on my Pandora case the shoulder button holes are a bit obsolete.

Being able to remove the Pandora from the holster with the headphones connected is a nice plus but won't be possible on the Pyra I think as the slit in the leather to the 3.5mm jack opening would be too long. A separate hole might be better in that case. Unless of course, the Pyra holster would be mounted horizontally on a belt, with the back side and case flap up. It could work but might make the whole thing a bit too bulky and bump sensitive as it isn't curved like a waist.

The ability to recharge my Pandora without removing it from the holster is a nice addition I use a lot but what I miss is the ability to see the status LEDs so I can't see whether it is on, charging, or if Wi-Fi is on etc.
It would be nice being able to see the lid logo/status LED's through the holster when designing a Pyra version.

Askarus proposed a belt clip that's open on the bottom. Though nice for quick and easy placement and removal, I wouldn't want that as I want it secured on my belt, also when I step on my Bicycle, sit down on a chair or in my car or when I accidentally bump it into something. I wouldn't want it to slide of accidentally when cycling through town.

The ability to attach a strap would be a nice addition too I guess though I don't think I'd use it, except when I want to bring my Pandora/Pyra and I'm wearing pants without a belt. Maybe the shoulder holster idea from a few posts up would be nicer in that regards.

Extra storage space for an SD would be a bit too much for me, the Pyra has more than enough storage on it's own IMO.
I'd rather have a spot for a couple bank cards or something.


@Mr_Loon I like that GOT book cover. Great work!

This looks pretty awesome. Whoever did it, they should start selling them on Etsy.

Eight Bit said:
Maybe the shoulder holster idea from a few posts up would be nicer in that regards.
Click to expand...

Shoulder holster a Pyra mini computer? If we all still wore suit jackets it would be all 80's cross-draw FBI style 'n stuff. Just be very very slow about it when reaching for your Pyra in the US...


Eight Bit said:
I hope to get one of the 500 clear cases and get a Pyra version made with it
Stay tuned!
Click to expand...

Looking forward to it!
L

Time to unbury this thread, maybe. @Eight Bit, what you say?

As soon as I have a Pyra I will look up this guy to see if he still has his business... It's been such a long time already..
M

I'm interested after Pyra received. Will watch for updates on the thread.

What made you decide against the humble bandolier?

comradekingu said:
What made you decide against the humble bandolier?
Click to expand...

I'm a technician, I wear stuff on my belt, close and snug to my body.
Porto, leatherman, flashlight, phone/pyra?
I wouldn't want to handle stuff slinging down each time I bend over