Some of you might know that Wally (a moderator here and fellow community member) is currently on a trip through Europe.

Yesterday, he was in Munich and therefore not far away from me and Global Components.
Well, and as Nikolaus received the new PCBs a couple of days ago and finished doing quick tests with them, I took the opportunity to meet up with Wally and his girlfriend at Global Components so they can get a tour of the factory and also meet up with Nikolaus to pick up the new PCBs - the final revision!

So yep, we got a couple of new mainboards including the new 4GB RAM CPU boards now:

These little buggers have cost 25,000 EUR just to produce them... yep, developing and producing something like the Pyra is pretty expensive!

Are they working? Have all the bugs been fixed?

Well, it's impossible to tell whether all the bugs have been fixed. All KNOWN bugs have been fixed - but there can always be well hidden ones, like with any other device out there, be it smartphone, washing machine or whatever.
But yes, there shouldn't be any obvious showstopper now.

Nikolaus has already tested whether the issues we found with the last revision have been fixed - and they are.

The sad news: The wonky chip is no more there as you know it.
The good news: The area is now full of wonky parts

No more sirring noises, USB is now working as expected, holding a shoulder button while switching on the system no longer stops the unit from booting... well, and all other things we found are now fine as well.

While Wifi has not been thoroughly tested (see further down), a quick test showed promising results.
Here are the new Wifi antennas:

So what we have here is most likely (99,9% sure) the final revision of the PCBs!

Here are some pictures of the whole PCBs:

What's left to do?

Thoroughly test the PCBs in order to prepare for Mass production

Nikolaus did a quick test of the PCBs. All except one or two are booting into the console without any issues, which is a good start.
However, we now need to more thoroughly test them. All sensors, connectors, functions, etc. need to be tested and reported back to Global Components, so they can check the issues and make sure to keep the failure rate as low as possible for the mass production.

That's what I'll be working on within the next few weeks.

I'll also assemble more units and send them to developers to help out as well as the ones who ordered a prototype (once they are tested).


Optimize the resistance value for Wifi

We've improved the antennas and the traces on the PCB have been optimized for our Wifi Antennas as well.
This should give us a very good Wifi reception already, but it can be further tweaked and improved with proper measurement devices.

We've got a company who will do that. For the exact resistance measurement of the PCB traces, we've added the following testing area for them:

So if you ever open up your Pyra and wonder what this is: Now you know

As we now have the final unit, it's time to do the CE/FCC-Tests.
The lab has been booked for August 8th.

On that day, I'll do the final CE Certification of the Colecovision USB Power Plug (you can find details about that here in case you haven't heard of it) and also a pre-testing of the Pyra.

The Pyra is a complex device - so it could be it needs some additional shielding, etc. to pass the CE.
In that case, it's enough to book the lab for 2 - 3 hours and check for any issues - that's a lot safer and cheaper.

So let's hope no CE issues occur on August 8th


Basically, that's all that's left to do.
(well, hardwarewise, of course. Software will constantly being worked on).

It's also time to arrange the mass production... order all needed parts (for cooling, packaging, etc.)

Please don't expect that we'll start shipping in a month or so (it will always take two months )
Preparation, receiving all the needed parts, etc. always takes some time as well.

But there's no turning back now


Ah, I got some more pictures for you. A fully assembled unit. If you visit the GamesCom, this is what you will be able to test out! 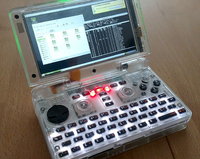 Here you can see the aluminium plate to cool and shield the battery from the heat as well as the heatsink hidden below the USB port:

So much for todays newspost

Feel free to post any questions if you have them.
However, don't forget I'll have a live video stream soon as well where you can ask questions live

More on that later today.

It's wonky Jim, but not like we know it.

@EvilDragon. Thanks for yet another great update. I think this would be a good moment to congratulate you with this major milestone. I can only begin to imagine how stressful and exhausting this journey has been for you so far.

EvilDragon said:
The lab has been booked for August 8th.
Click to expand...

That's looks good. Final PCBs in that case with the plate, that looks good!!!

Sent from my SM-G9550 using Tapatalk

... in case I find the time, which will be the bigger issue

Thanks again for the opportunity to see GC and im thrilled that the board you got is good enough for mass production! Was a great pleasure to meet you and @hns

I'm pleased you were able to hook up with Wally+1 and give him the works.


EvilDragon said:
But there's no turning back now
Click to expand...

You've probably no real idea how big of a deal that is, and really reading between the lines it's been basically the case for a year or two now, but it's so very cool to hear you say it.

Regarding videos I don't mind who does them, just that some more get made. You're the only professional video editor with a prototype unit as far as I know, and the difference shows (provided you're not using your smartphone in a hotel room!), but I'll take what I can get just at the moment. Since we haven't got 3D plumbed in yet, I guess there's not too much you can actually show yet in terms of software though, but maybe it's time for Exophase to get a unit and port gpsp to it

Have any prototype units been sent out yet? How about the paid prototypers (Grench et al.)?

Thanks a lot for the update! I cross my fingers that there are no more hidden bugs!

Any news regarding the cases? How is the production going?

This is great, no, nonumental news!

What about 3D acceleration? How is that coming along?

Gosh that title ("The Final Revision") really had me worried for a moment! Each time the design has been revised (lately), it's been the "final" revision, and I thought "Oh, no. Surely nothing needs more revision?"! Then I read the post and realised that it meant the final version, and that (probably) no more revision will be needed!

What is the timeline for the WiFi optimisation? That is,

1. When will the company doing the testing get hardware to test? And

2. How long do they need to do their testing and report back?

Presumably the mass production population of the boards cannot happen until this company has reported. And between the delivery of their report and the mass production population of the boards, if there are any changes to be made, presumably some prototype boards will have to be populated (or modified) with the proposed changes and those changes tested. So it seems that the timeline for the WiFi optimisation could very much effect the date when Pyras finally ship.
F

This is great news! I think I'll finally allow myself to get excited. In the many years since my pandora pre-order i've gone back to university and now been working as an embedded developer working with mostly Cortex-M0s. I don't know if I'll have the time or skills to contribute to the pyra as a developer but I'll at least be going through the datasheets and following along on the dev forums to get more familiar with it.

Also, now we have 2 wifi antennas does that mean MIMO wifi will become possible? That might make transferring files from my server which is connected over 300Mbps 802.11n wifi to my router nicer, although with only 20-21Mbps internet here, even 802.11g just about saturates that uplink as is.

Looking at that heatsink, how close is the fit to the USB socket cage? And is it worth protecting the battery from it at the side there?

Pyramancer said:
What is the timeline for the WiFi optimisation? That is,
1. When will the company doing the testing get hardware to test? And
Click to expand...

We have to make an appointment with them.

2. How long do they need to do their testing and report back?
Click to expand...

Probably about 1 - 2 hours.
Basically, you're trying different resistor values and measure if that improves Wifi or not.
If it gets worse, you're moving in the wrong direction.
If it gets worse in both directions, you've hit the sweet spot.

Presumably the mass production population of the boards cannot happen until this company has reported. And between the delivery of their report and the mass production population of the boards, if there are any changes to be made, presumably some prototype boards will have to be populated (or modified) with the proposed changes and those changes tested. So it seems that the timeline for the WiFi optimisation could very much effect the date when Pyras finally ship.
Click to expand...

The prototype boards probably won't have to be optimized, as it's just a small optimization.
Though changing a couple of resistors is also just a matter of a few minutes

Getting the PCBs and cases will probably take a lot longer than doing the testing, unless their lab is booked for the next couple of months, which I seriously doubt

Don't forget: The molds for the cases are being moved AFTER UniquePlast comes back from holidays, and that is middle to end of August. So we won't have cases before September.

Looking at that heatsink, how close is the fit to the USB socket cage? And is it worth protecting the battery from it at the side there?
Click to expand...

Not sure what exactly you mean by that, sorry

One day I'll be writing code in the car...

Any word on case production? Like if FA finished/is almost finished with their run?

EvilDragon said:
Not sure what exactly you mean by that, sorry
Click to expand...

likely I think he's concerned with heat from the heatsink dissipating into the battery compartment. Just a non-professional view of the design I think with the casing and an small air gap, I don't think this would be that big of a deal.

Hopefully there are no new bugs and the mass production can begin.
And I'm happy to be able to check this neat Pyra at Gamescom, looks really nice.

SSID: EvilNetworks for the win! Amazing progress and beautiful pictures! It’s always a joy to see the GUI there on the screen. Then you start to imagine holding it all in your hands... I never had a pandora or anything like that, so I’m really looking forward to the experience!
Last edited: Jul 22, 2018
You must log in or register to reply here.
Share:
Reddit Pinterest Tumblr WhatsApp Email Link
Top