I logged in for a bit the other day. No one else was on. Walking through some part of what I assume is someone's castle nearby the actual main castlebase, I turned a corner and literally ran into an Enderman.  He was stealing dirt blocks from somewhere.
?

Okay, I have updated all plugins and all server software. Also I have gotten rid of some old and dysfunctional plugins.


I have bought ChatControl Pro, after having used the free version for a while. It's a great chat system, allows chat over several servers and other cool things.


After talking to FelixNemis I decided to add worldguard and worldedit once again. Now if someone has any schematics or wishes for some of their building to be imported, please pm me or drop me a /mail ingame! Cheers!
?

Oh, and I will be online tonight for some play and for testing the permissions that I hopefully fixed now ^^. So if anyone cares to join, let's have some fun!
?

just a little update: we have started building minigames on the lobby server. There will be a bombermanlike arena with different levels you can load to duke it out in, and a small boat race track. Maybe someone else will contribute another good idea.


Also I have given the overviewer configuration an overhaul. Seems I made a syntax error in POI generation and none of the new players were shown on the online map. That is fixed now. Cheers!

There was a bit too much lag for me when I played last
?

ah darn. that's too bad. I tried making the server run as quick as possible. it's running from a RAM drive, server is spigot because it utilizes multiple cores and is more lag free than vanilla.


I am afraid, there is nothing more I can do. You're in the US right? FelixNemis had a better experience I think. maybe try again another day?

I heard your minecraft server is filled with nothing but a bunch of creepers.

I've enjoyed popping in, but haven't had a lot of time lately. Hopefully I'll be able to build more over Christmas vacation. On the topic of chat: I only every had one other person on the server with me and never saw any messages come up. Will try again the next time I'm on with somebody.
?

TrashyMG said:
I heard your minecraft server is filled with nothing but a bunch of creepers.
Click to expand...

hehe... that depends, are you calling me creepy? ^^


chat is working correctly now, permission ex is doing it's job quite well.


there hasn't been much activity on the server lately and I'll be gone for 6 weeks in january working at another city. So I'll be able to login occasionally but won't play a lot. maybe it'll get more busy again in spring.


if you guys want to invite someone to the server, please do so! I am hesitant to make the server completely public, but everyone is welcome that has relations to members in any way.
?

- The Server runs 1.9.2 now and all plugins have been updated with it.
- We now have a couple of minigames in the game lobby, right now there is:
- Bomberman Arena
- Tic-Tac-Toe and connect 4, playable through the inventory screen.
- We now have a mumble server (murmur actually) running but I didn't have a chance to test performance yet, since not a lot of people are playing right now.
- The goddamn IRC bot has been fixed and should now (finally) work as expected. Any player can mute and unmute the channel, should a troll find their way onto IRC.

I am planning a race track but am lacking a decent plugin for it that does not require a complete server overhaul. I have found two that would be possible but they are not free so I'll wait a bit before I decide to buy either one. If anybody has a good tip on a decent plugin or wants to build an extensive set of mariokart-esque racing tracks, contact me and build away!!!

Still looking for active players and maintainers! If you promise to be good and help out, you can score a shell account on my server! I need your help though, the server needs to be maintained and kept up to date and it's quite a bunch of work for me alone. I'd be glad if someone could help out. Cheers!

EDIT: Also looking for some pixel art in the lobby! We need a super-sized pandora and giant NES bomberman has to hover over the bomberman arena...
Last edited: Apr 19, 2016
?

- Server runs latest version now, 1.11.2
- If you want to experiment, there is a forge server running which you can connect to if you have the appropriate mods. Right now it's only opencomputers but I'd like to add some other interesting things.

Anyone want to recommend some forge mods I could run? I think industrial craft could be fun, especially combined with opencomputers.

Oh thanks for renembering.
I had to reinstall my complete Windows 10 and lost your IP...and forgott it.
I will add your Server to my Serverlist again

For building the mega Sized Pandora..
..i can give you a Link from the OpenPandora Minecraft Project which contain the Pandora for adding ist with Worldedit when you want.

My Brother build that because i do not have the Abilitys to make such Things in Minecraft.
?

Yeah man, I'd love to add it to the lobby

Also, your world is still online and pretty much noone uses it

the cutted Map is here:
http://qemu.openpandora.org/altePNDs/Minecraft_OpenPandoraHandheld_Map.zip

Beware its a realy Big Building

I will host the world temporarily with multiverse so I can extract the data.

Great little server. I'll be back!
?

@ingoreis I imported the openpandora into the lobby. It's so huge!!! But you warned me
I tried to import the whole model as a schematic on my first try and that crashed the lobby, so I split it into two schematics.

In order to marvel at the greatness of the pandora you'll have to use the viewing platform. There is a teleporter in the lobby to get there.

I do play MC since Beta 1.8, but I and a couple friends are already working on our own servers. I'm more interested in modded 1.7.10 anyway.
I don't know by heart which mods I'm planning on using are 1.11 friendly, but if you're interested anyway, I can always suggest some.
But don't ask me for all of them, there will be like 200 (and still coherent !)... Big modpack indeed
?

Hey @Kev2442 a few recommendations would be nice, I am looking for interesting gameplay enhancements. I used to run a 1.7.10 instance on the server with twilight forest and LOTR but since it was horrible to maintain together with a vanilla server that needed to be running the latest version (community wants what the community wants), I got rid of it in favor of client compatibility.

We have been running that server since march 2011, we started with Beta 1.3

How in the heck are you guys running 200 mods together? That is a nightmare to maintain and configure!

Looking at the OpenPandora model from the viewing are in the server lobby. 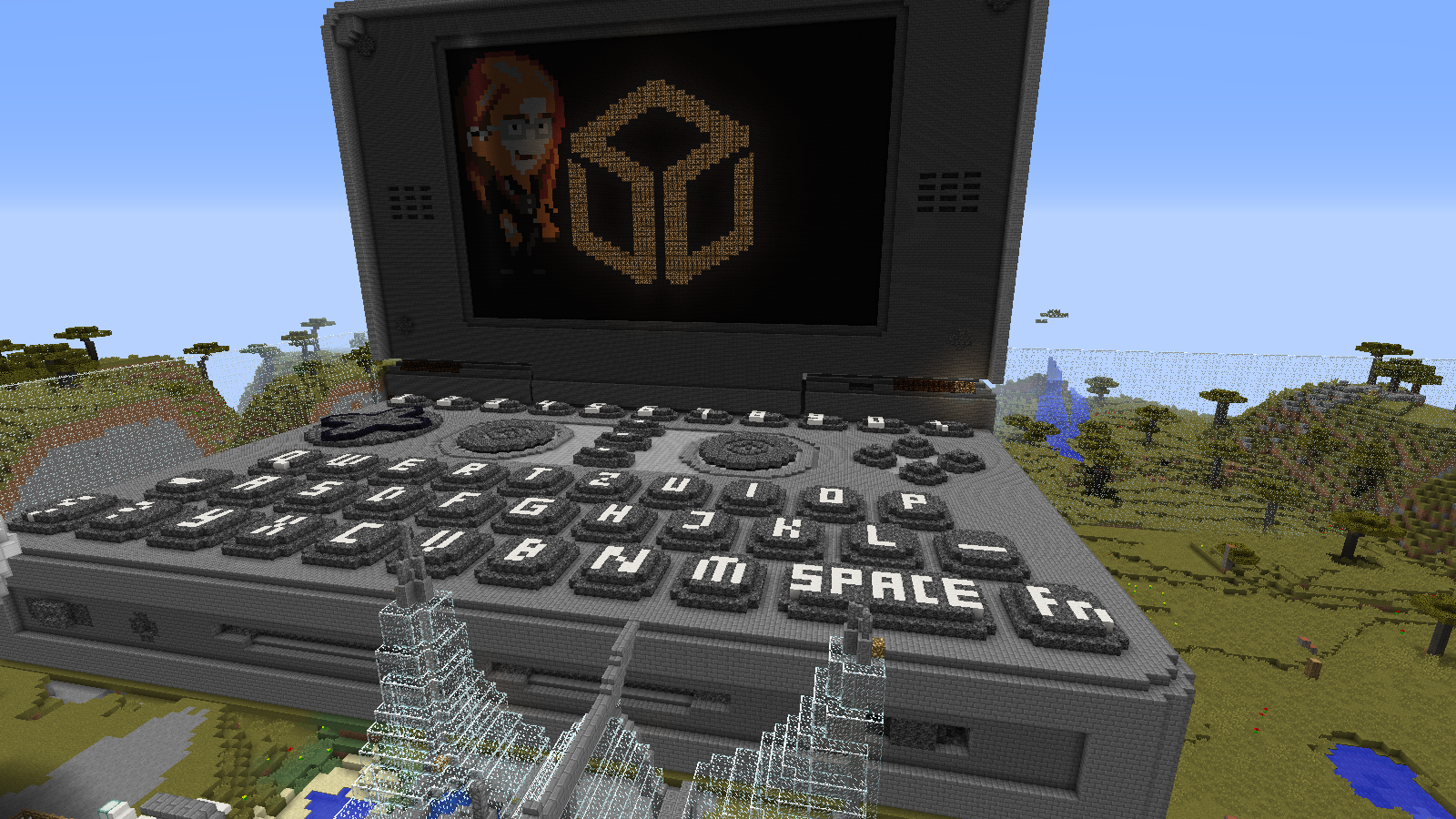 Well that's a project. I'm not adding all mods at once, so if it crashes I have a few ideas already. I've tried that numerous times (successfully) but I started over and over before it was finished because of mod updates and all.
The last one before now, I only needed configuration, resource pack (adapting Painterly Pack to the hundreds of added blocks for variety, love that thing) and further testing on the server (only testing in solo until it's mostly finished).

I'm not into magical stuff, so this modpack mostly focuses on expanding the universe (Mo's Creatures, AppleMilkTea, CustomStuff 3...), enabling more contraptions (MineFactory Reloaded, qCraft, ProjectRed...) and sculpting complex buildings (BiblioCraft, Carpenter's Blocks, Armourer's Workshop...).
Also a few utility mods (MagicYarn, CustomNPCs, MultiMine...) to wrap that up in a private (at least for now) multiplayer server, which will consist in creative building cities within a coherent and realistic (for Minecraft) multiverse, then maybe a little roleplay.

I'm thinking of stuff like army bases (Flan's Mod), space stations (Galacticraft), railroad stations (TrainCraft)...
Of course it comes at a price : I'm trying to keep it working within 8 gigs of RAM (Windows OS included), so about 4 to 6 dedicated to Java. It's not really optimized.

I still have loads o'mods to recommend, that's just a preview. If you have interest in a particular gameplay, I might be able to suggest some tailored to your needs. If you're into magic for example, Thaumcraft is a nice start. Never played it though, so don't ask for help, heh.
You'll also probably like premade modpacks like those found on FeedTheBeast. If you need any link you can't find on Google, don't be afraid to ask. Some I got from japanese forums (I don't read japanese, just found through other sites), some from GitHub, but mostly CurseForge and the Minecraft official forum.

That's it for now, if you need anything, you know where to find me
You must log in or register to reply here.

Anyone Playing Minecraft? I Need A Tester For The Pirate Games Server

Anyone Playing Minecraft? I Need A Tester For The Pirate Games Server

How should lag _feel_? how does it feel in games today?