I Got My Pandora

Congratulations - I hope you're having fun with it.

There's some information (and photographs) relating to that in this thread from the other forum, if that's of any help.
Last edited by a moderator: Dec 17, 2015

While I do have a list of critiques, more than anything I'm just happy to have it as part of my growing collection (ack! old 2009 photos!). I'll probably write up something eventually.


And this morning, just for the heck of it, I ported my game. 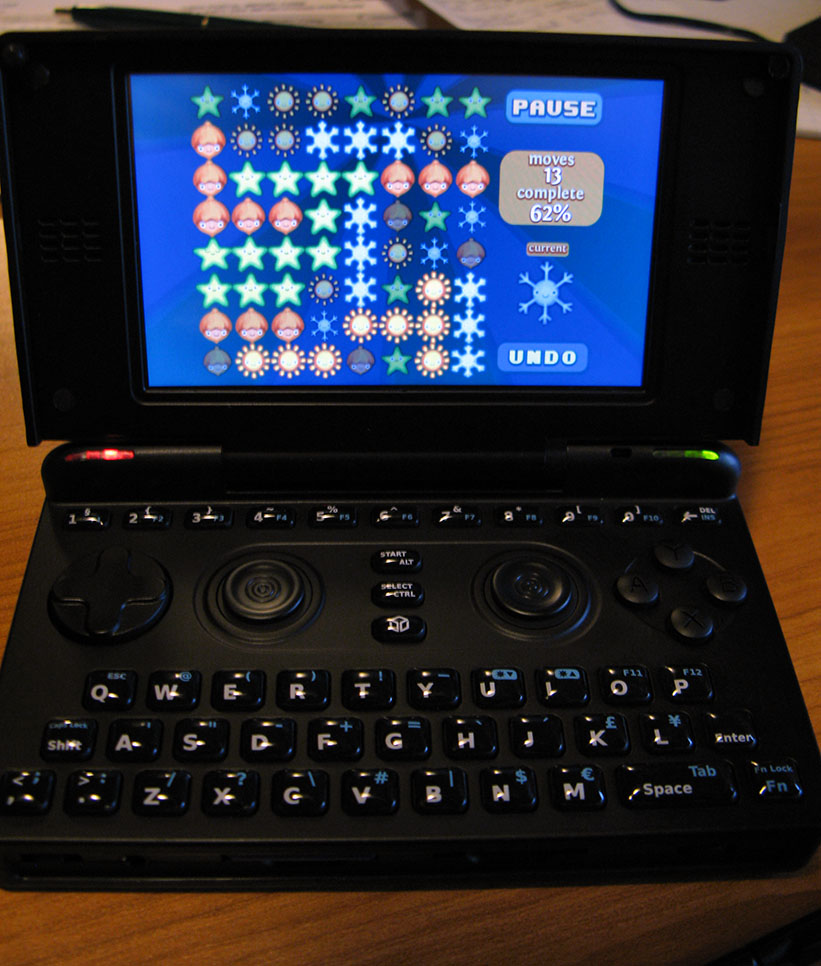 I got mine a week or so ago. Still enjoying it. Had to maually fix the L button but its all good now. Hinge has loosened up and I hope it doesnt get any looser! 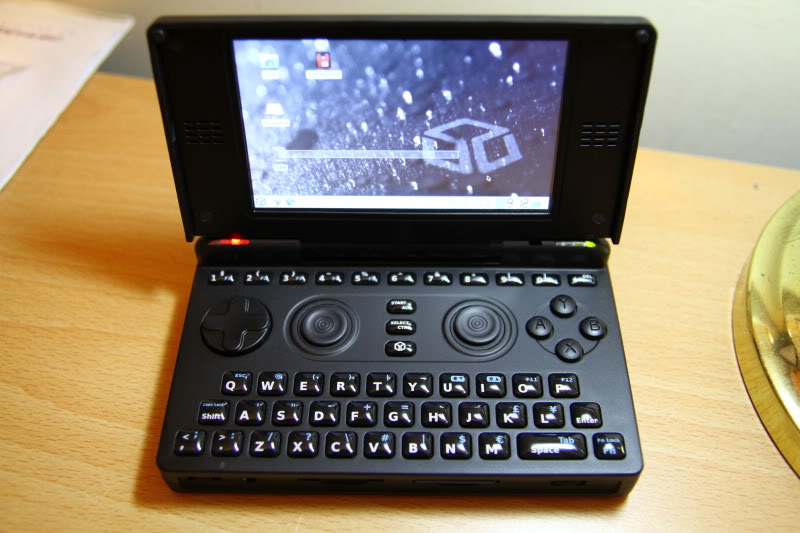 Got mine on Friday. I didn't want to post an impression right away cause these tend to overly positive.

So now after playing with it for a few days my verdict is:

The hardware is really good! Not perfect but way better than my PSP, WIZ or GP2X. I was a bit surprised to be honest as I thought it would feel more 'homemade' but it feels really sturdy and well built.
My L trigger wasn't working so I had to open it up and position that little rubber thingy right. My hinge is tight enough so I can position the screen in any angle I want.

The d-pad and buttons I would say is superb. I actually think they rival those on the NDS. Both in feel and position. Thanks DaveC!
Haven't used the nubs much(a bit quake 2) and they work well. They aren't as good as the thumbsticks on say a dualshock but they easily beat the psp nub. I must say it feels great to be able to play an FPS on a handheld without feeling handicapped.

The screen is nice. It does have a bit ghosting(nowhere near the level of the psp though). Changing the gamma settings to CRT TV seem to avert a lot of the ghosting for some reason. This was the thing I was most worried about but I can honestly say that I am completely satisfied with it.

Another thing I was pleasantly surprised about was the keyboard. It may be because I am used to the onscreen keyboard on my HTC Hero, but I find it very easy and fast to type on and the keys have a nice feel to them.

I wont go into software because I thinks is a bit irrelevant for now. It can (and will!) always improve. We just need more units out there I think.
But it does the job. A bit rough around the edges. A bit buggy here and there, nothing mayor though. I should note that I have only used xfce not minimenu.
A lot of the emus I tried actually worked great!

Overall I am more than satisfied. It was easily worth the money and the (2 months )wait. It is without a doubt the coolest gadget I have ever owned! I am still amazed that it actually is a little mini computer not just a handheld gaming device.

Yes I finally got my Pandora and my god was it worth the wait. The build quality simple amazes me. The screen and the finish of the System software. Kudos to all the people involved.

I did run into problems with corrupting files on a 32Gb SD-Card which had problems under the FAT32 file system but I formatted it in NTSC on the PC and installed the Codecs.pnd file that opens up NTFS file support. Not had a problem since.

I'm one happy camper and opening Pandora's bucks didn't bring me any Catastrophe.... yet....! LOL

Esn said:
Got mine today. Couldn't resist and made a little photo-album here: http://imgur.com/a/B8lJq
Click to expand...

Looks like someone's overtightened a screw in the top right of your pandora there!
Click to expand...

Mind you, it could be worse -

Just got mine, no problems with build quality. Very small scuff on the top but its hardly noticable. Installed the latest RC firmware and been giving N64 roms a go. Going to give a whole bunch of other games a go as well

I got my Pandora too (A fast pandora hehehheh)
But only at the end of this month i finally can put my hands on it, because they send the console at my parents house by error
P

Got mine about a week ago - it rocks! One screw was missing... and some others were overtightened... and I had to fix the right shoulder button and it's still not optimal... but those are my only complaints. Screen is great, controls are awesome, battery lasts forever, and the PND system is quite easy. I've loaded it with a bunch of goodies, and all my friends are jealous!

I have had my Pandora for 4 days now & its just amazing. Great little piece of hardware. The plastics are a little on the cheap side, but its solid overall. The screen is just beautiful & the controls/keyboard are spot on. Software is a little quirky... but works & will continue to be improved. I have several of the emulators working excellent (N64, PSX, Mame, Mega Drive, PC engine, Nes/SNES) game boy advance is lacking... but overall its a really nice machine. Using the wifi when sitting on the couch to hit facebook & google news & works perfect. A very very nice machine overall. I am looking forward to more of them getting out in the wild and seeing the software mature.

I've got my Pandora yesterday. Left trigger was deeply "dug" in the case. I tried to remove screws to see if I could fix it. One screw still refuses to be removed :/. Gosh, there are some serious issue with assembling people. So I was just be able to "un-dig" the left trigger with no assurance that it works and no possibility to open the case to be sure everything else is okay. How can I test it works ? It seems there is no buttons check program delivered with Pandora.

Apart from that, it is a nice machine.

Code:
I think a GUI version will be in a future hotfix.

Code:
I think a GUI version will be in a future hotfix.
Click to expand...

Got my Pandora yesterday 07/03/2011 (ehmmm Premium ) and i'm very happy this is a nice machine.
Mine seems near perfect, all button working, case is well assembled, very good screen, Wifi work.
Just updated to HF_5.
So for now im playing with some emus...

So, I got mine when I got home last night and figured I'd post my first impressions:

There were two items that weren't quite right out of the box, but were easy enough to remedy:

The case towards the rear was gaping a little. So I opened the input checker app and while ensuring I still had operational shoulder buttons, tightened the screws. All fine now.

The right SD card slot didn't seem to want to eject after I put the card in. If felt as if it was scraping when I inserted it and when trying to push the card to eject it, it just wasn't moving at all. Anyway, I persevered and found that if I pushed the card on the left hand corner, it ejected. I inserted and ejected a few more times and it seems that it's no longer an issue wherever I push the card.

Initial impressions of the OS were that I struggled to get to grips with navigating my way round. Was I just over excited? I tell you though, stick with it and if all else fails: stop, take a deep breath, AND THEN REMEBER THAT IT'S GOT A TOUCH SCREEN AND YOU DON'T NEED TO USE THE NUBS!!!! Fool.

On that subject though, the stylus was VERY stiff to extract, but again, in and out a few times and it becomes much smoother.

I've not run much in termas of software yet, but when I have I'll post again with my views.

But my advice to you guys who are still waiting, hang in there and I'm sure you won't regret it.

Sugarfix said:
The case towards the rear was gaping a little. So I opened the input checker app and while ensuring I still had operational shoulder buttons, tightened the screws.
Click to expand...

I did the opposite and loosened all mine by about a half turn when I got it, better a little gap if you can live with it than risk any cracks.
Last edited by a moderator: Dec 17, 2015
F

I got my Pandora on Monday, so I've been fooling around with it for roughly 6 days now. Bottom line is: I LOVE IT. The d-pad and buttons are great and I think the keyboard is FANTASTIC. Big enough for typing fast with your thumbs but to big and definitely not to small as the keyboard on the n900 (but that is a phone). The numbs are good and I like the idea of using the one numb as a mouse pointer and the other numb to left and right click. But it takes some time to get used to though. My right numb seems to have bit of friction, like it almost gets stuck in a corner or at least rubs up against one.

I really love seeing the 2008 forum people getting their units

That nub symptom has been reported by a couple of people, apparently the disc of the nub is just hitting the circular cutout of the case on some units. They say you can try pressing the case down in that area, say with a thumb on each side.

fettouhi said:
My right numb seems to have bit of friction, like it almost gets stuck in a corner or at least rubs up against one.
Click to expand...

^ I haven't had this happen with my unit, but would a fair description of this technique be "Like pushing Lego bricks together"?
You must log in or register to reply here.

J
Yay, Got My Pandora

Finally got my Pandora!

I got my new toy!