I might be late picking up on this, but i guess it's better late than never.
Anyway, i recently noticed this little story about a listing on a chinese website which allegedly had a moded GameBoy Color with a true backlit screen on sale (here's a video about it from some guy on YouTube). Now apart from this overpriced listing on eBay that appears to have one of those said 21 moded GameBoys for sale, i didn't find any further developments coming from that direction.

When looking further however, i did also discover this guy named BennVenn (Facebook page) who managed to create a similar mod, where an actual AGS-101 screen from a Gameboy Advance SP was adapated to work with a standard Gameboy Color using some kind of custom ribbon cable with an FPGA attached to it - mod kits for which are being sold here (US/CA only). There's also a video (made by someone else) demonstrating the concpet:


From what i understood from the first video and that eBay listing though, is that the original backlight mod from China used some kind of a third party IPS display (whatever that actually was), while the later mod by BennVenn used either an original or an aftermarket chinese clone of either AGS-101 or AGS-001 displays which were meant to be used in GBA-SP's.

So for those of you who might have an opinion on this, what do you guys think about this and which in your opinion is more technically viable for your avarage retro enthusiast?
Last edited: May 29, 2017

I personally don't like mods that destroy one working unit to enhance another.

I saw this video & wondered why the owner of the modded unit didn't just photograph the screen so that we could find out which model was used.

@Ian J
According to this photo, one could assume it was because the owner didn't want to tear off the sticky insulation foam as he may have planned on reselling the unit later or something.
Anyhow, there have been chinese clones of the AGS-101 screens floating around on eBay for a while. I've seen claims online that they're not too shabby and can do a good enough job, so perhaps hacking apart an actual GBA-SP may not always be necessary anymore.

Really I don't see the point because AGS-101 (a GBA with backlight) has very different resolution and aspect ratio, so, even if you are able to connect that display to a GBC (with original hard), screen image would be distorted or reduced inside display (with big black borders like here 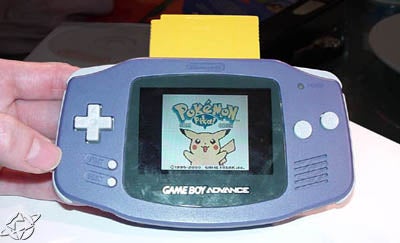 You end playing GBC games with a wrong aspect ratio or with a lot of border inside display (like with a GBA playing GB/GBC games), do I don't see the point using a GBA SP display on a GBC.

Of course, if you have a GBA (better with backligh), it is a plus you are able to play GB/GBC games, but using a GBA display on a GBA is like distorting original aspect, not for adding backliht, but for changing resolution and aspect ratio.

PD: On other way, I think original GBA is the more ergonomic Nintendo handheld console, much better than GB/GBC (they were too much square). Personally I would prefer to play in a GBA (not SP, but with AG-101 display) than on a GBC for that reaseon.
You must log in or register to reply here.

Game Boy Gets The Advance Treatment

Chinese-made gameboy 3 on ebay - does anybody have one?