A journey of self discovery (Latest Artwork and progress)

Personally I think that it's better to learn drawing with computer and tablet and try with pencil after it than in reverse direction. You'll get anything possible to see in Krita faster than in pencil drawing.

Another story: Some time ago I bought an Intuos tablet... to try with CAD. And I think it was worth it (anyway it was very cheap, as it had a nasty capacitor and I had idea how to fix it without destroying the case). So now I'm doing my KiCAD designs using stylus in one hand and the second hand on a chord keypad "prototype". Goes much faster.

Ctrl-Z is fantastic to have

But here I thought DrHAX was in this situation:


but he's richer than I am!

Lol! Yes the situation at hand isn't dire. I am not rich but I have very little overhead( especially considering being single now)

It also gives me the time to pursue this. I do enjoy sketching, it's just digitally you can copy over a layer, edit line art or practice numerous colours without destroying a piece. I used to ink with pens and would be sweating. Digitally there's less stress.

a dream of mine is to van dwell and see the world though. Lol. Wanna be artist in a vw camper van anybody?

Still I am appreciatative of any feedback.

just finished this piece today. Just something to practice headshapes with as well as some features in krita. Tomorrow is my birthday. I get to go to work. 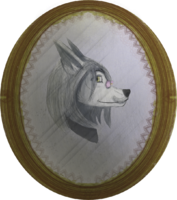 Recently purchased the album titled <|°_°|> by Caravan palace, and its been an absurd hit of inspiration till the point where its almost crawling under my skin. I always wanted to see if I could do animation. I've always had ideas for a few music videos when I hear some songs. I can see it playing like a movie in my mind; however, with this album I can clearly see it with a few songs.

I may end up drawing these characters.No scratch that I need to. If anybody has stumbled across the lone digger song on the album and the official video you'll get a really good hint of why this music is inspiring to me. Two songs really instantly triggered clear movie like visions. Russian and Aftermath. Whats funny is hearing the songs loosely with no clarity or closely triggered these video thoughts, but actually listening close and looking up the lyrics made the vision like videos matched perfectly.

There's a few other songs on there too where i've had strong ones. The only music album which has done this is Cut copy's bright like neon love album, and to some extent Galvany street by Booka shade. But those aren't as clear as this.

Now maybe I have something I can strive and practice for. Ahaha? Gotta have a spark, and a dream. Maybe I'll chase this because this could be cool.

My ex wanted to get into animation ,but she dropped the ball, well when I mean drop I mean lobbed it down a set of stairs and crossed her arms and went HMPH! She was 80% serious about it, so during our journey of researching for this her I learned a lot. I knew a few things, heck I understood how used to animation. She was going to go to college for it, yet some how... didn't? It's in the past But, what I learned from watching here fail gave me ideas of what I can do to succeed.

I need to shut up and start sketching.

Finished this character. If im going to draw her again might need to make a template or stamp for that tattoo. 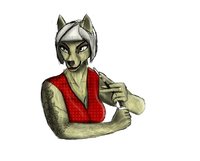 xnopasaranx said:
As you are trying to go for a gritty look, I strongly recommend trying some analogue techniques...
Click to expand...

I've had some luck drawing with a pencil (on paper), carefully photographing it (though scanning might be better), then adding colours digitally.
Like so:

Pencil makes it easier to hint at details, where (in my limited experience) digital drawing tends to demand perfection or look 'wrong'...

Couldn't leave Jacqueline alone. Had to finish it and sign it. Haven't drawn much recently. Life got in the way and stress has been through the roof. With my limited time I've been writing again since it takes less time and effort.

Find a new muse
You must log in or register to reply here.

Anybody have experience repairing a laptop's charging port?

Help Me With Artwork And Audio ;)