Built specifically for the purpose of recording and promoting Box86 videos - I present: 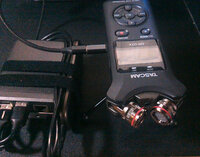 Frankencorder (4gb Pi) will be used to record my normal working Pi (8gb Pi) (the one in my profile picture).

Now on to learning how to make videos without looking like a silly person. First Box86 video coming soon
Last edited: Oct 10, 2020

@nomadicus The hardware is impressive indeed. Did you do something with the software (I don't know much about the OpenMAX API)? Do the buttons work for stop/start and does it autorenumber each recording? (like SOX, that has autorecording, only when sound is heared, it starts recording, and can be made to stop too with silence)

@FBnil - thank you, but it's not actually that impressive, I mainly posted it to show that I was working on a way to start making Box86 videos (and not going back on my promise) as well as demonstrating a relatively cheap solution to do it with ($55 Pi, $15 case, $50 SSD, $60 HDMI capture card (Pi does USB boot, so no SD required). (Okay, so not super cheap, but a lot cheaper than most professional solutions out there - and I already had everything except for the capture card).

The capture card doesn't have buttons - it's all software, but I did write a little Go program a while back that handles button presses and triggers events - so I may use that later on. For now it's mainly all standard stuff - except for FFmpeg which had to be rebuilt to include the OpenMAX library - allowing the Pi to use hardware assisted encoding up to 1080p. Apart from that I've written a simple bash script that automates various recording modes, increments file numbers etc. I'll control it using ssh initially.

I was shocked to find out that the most powerful machine that I own (yet rather limited by most people's standards) - an x86 box (LattePanda Alpha 864) couldn't handle encoding 1080p... barely 720p in fact. So... as I wanted to do Box86 justice I started to look for workarounds. In the end I decided to give my spare Pi a try (I bought the 4gb Pi when it was first released... and then they released the 8gb version.... doh...). Lo and behold - it actually performed better using plain old libx264 - than the x86 box did (despite having the ultimately useless Intel QuickSync libraries enabled). So then I decided to compile ffmpeg with openmax and presto Frankencorder's first version was born. A bit of scripting and some velcro later and there we have it: Frankencorder.

I had a little experience before using ffmpeg to stream some video here and there but other than that I have very little experience with the whole video thing - especially making them... So now that the hardware and software are set up... I will have to start setting up a storyboard and theme (and do lots and lot of practising) and start making the actual videos themselves... fingers crossed...
Last edited: Oct 10, 2020
C

I haven't tried myself. I think I have seen someone succedeeding with the 2003 version, but I'm not even sure of that.

hi..i compiled Box86 too.
Is there a simple Howto for installing Wine for Box86?
(I know that only a few Things work for now with wine,but fun with experimenting.)

I want to experiment too with older Windows Games

There isn't any HowTo for that to my knowledge.
You need to find an x86 version of wine (like here https://twisteros.com/wine.tgz )
You decompress it in some place and run the "wine" binary with box86.

You'll need gl4es also. For now, only GLES1.1 backend works on the Pandora. I suggest you use LIBGL_MIPMAP=3 LIBGL_NPOT=2 with wine, it helps for some games.
If you go into the wine bin folder, type:

Code:
for a virtual windows desktop where you can launch things...