atari_afternoon said:
I get killed to early on still so I would be last in this C4A list (like in almost all other ones too ) but I am in for a friendly weekend match
Click to expand...

What kills you generally? As someone who ascended multiple times with multiple builds over the years, I hope I can offer some advice

@Citizen_Lurker : I just died at the hands of an iron golem (1606 points, depth 8). Is there a way to defeat that monster ? Would throwing it a bottle of water make it rust ?

@Citizen_Lurker : I just died at the hands of an iron golem (1606 points, depth 8). Is there a way to defeat that monster ? Would throwing it a bottle of water make it rust ?

Oh, iron golem is the toughest monster in the game basically. I think you can turn it into flesh golem (slightly less tough) by using Stone to Flesh spell on it, but I'm not sure. Tossing a bottle of water will only make it wet
Your real options are:
1) Run away (the best one most of the time)
2) Possess it and make it (F)orget Lightning Bolt, also while you're at it maybe give it that -1 evil club you have lying in your inventory. After that you may as well kill it, but be aware that it still has lots of HP, even if the beast won't be able to hurt you with -1 club.
3) Possess it and make go take a dive into a pool of lava or something. Don't forget to (q) release it before it dies though.
4) Possess it. Make it, in turn, learn Possess, and make it Possess something else. When that second Possessing runs out, your "soul" will return (forever) to Iron golem's body. This trick is known as body-swap. Be aware though that Golems don't eat and don't regenerate health, so you'll need a ring of regeneration or some healing spells.

If you have shock resistance/reflective and speed advantage (e.g. boots of speed), you should be able to dance around it, killing it with those extra hits that you gain from the speed. Where's the fun in that though?

Well, I'm sure all of you will be pleased to know, I've just finished the game as the End Boss.

That's right! When I reached the bastard at level 25, I made him forget his spells (so he wouldn't cast preserve on himself), turned him into stone, grabbed the statue, quickly teleported (!) away to level 1. After having setup a sort of "laboratory" in a safe place so no pesky critters would bother us, I "defroze" the Belzebub, made him learn Possess and Teleport, and Entombed my original adventurer so he wouldn't kill my buzz. Then, I body-swapped into Beelzebub, e.g. playing as the Big guy, I teleported from our "safe haven" and possessed some critter. BAM. After all that, I was prancing about as the Beelzebub himself, while my original character rotted away in self-imposed exile in a tomb :-D

Then I just went ahead and entered the final level (aka victory level) and accepted the congratulations. I wonder what the villagers thought when they saw me...

And that's it I think, there's nothing left for me in this game :-D
Also, some screenshots so no one would call me a dirty liar.
On a separate note, Pandora version of POWDER is by far the best one available. It's both portable and playable with a keyboard. Best of both worlds. Big thank you to Magic Sam for porting the game and to Jeff Lait for inventing it 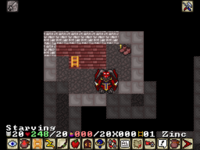 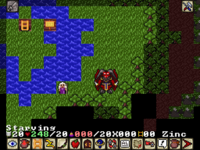 @Citizen_Lurker : congratulations for yet another ascension in POWDER, and many thanks for the kind words, it's REALLY appreciated

Cheers, Magic Sam
You must log in or register to reply here.