Release OpenTyrian in the repo

Note: Touchscreen works fine in the menus for selecting options, doesn't work so well for gameplay.
Note: For Compo4all support, you need to setup a profile with mame4all or the standalone: compo4all manager. 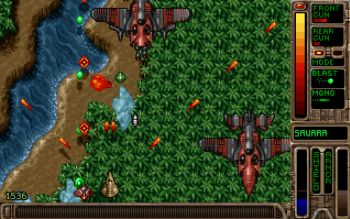 *Update 2014-02-11:
Merged with Elwing's Opentyrain Compo4all version for the GCW-Zero based off my original C4ALL version. Now in one executable. Comp4all mode will show as a menu item in the new game screen, Score will now only upload at episode end instead of at the end of each level.
Updated to newer git sources.
Removed unnecessary libraries that are already on the firmware.

*Update 2013-04-19:
Comp4All change: Removed Difficulty score multiplier and locked it so that Single Player Arcade mode can only be ran in Normal Difficulty. This will ensure fair scoring..

*Update 2013-04-18:
Comp4all Version now resets weapons and score when when starting an episode after you complet a full episode, this prevents score snowballing.

*Update 2013-04-17:
Comp4all Support added, Only works on 1 Player Arcade mode at the moment. Score will Submit at the end of each Level completed. Score will scale on Difficulty selected. using a multiplier system. It will show the comp4all score and if it successfully submitted the score to the server all from the game's end of level summary.

*Update 2013-04-03/ part2:
realized PND was poorly optimized causing lag on Rebirth and CC units.. Should now be playable on all units at 600Mhz. May have also fixed odd issue with prior save games being wiped out..

*Update 2013-04-03: Rolled in changes from current git sources, compiled against recent changes in Notaz's SDL. Unicode issues seem to be fixed without hacking. Hopefully it fixes some of the reported issues with weapons. Also there is possible Tyrian 2000 support according to the git change log.. don't have the data files to try it out.

Is there any difference to the old PND?


Nice to see it in the REPO. This one is really great.

Askarus said:
Is there any difference to the old PND?


Nice to see it in the REPO. This one is really great.
Click to expand...

Well It's running on the newest source code this project still seems to get a bit of updating, seems to have more shader options. outside of that, I don't think there is much difference outside of that it's in a convenient location.
Last edited by a moderator: Dec 15, 2012

I just pushed an update, fixed a minor tearing issue that was reported to me.

Cant wait to try this out! Is there a possibility of supporting additional Tyrian 2000 content with future releases?

Monkfish said:
Cant wait to try this out! Is there a possibility of supporting additional Tyrian 2000 content with future releases?
Click to expand...

Not from what I've been reading, there was an abandoned project that was going to attempt this and looks like they didn't even have any code released.. I guess there are a bunch of difficult differences between the two games that seems to give people a hard time. I mean it's still possible that perhaps someone can.. but for now it doesn't look that way.
Last edited by a moderator: Dec 15, 2012

I can't save when starting new FullGame.


When I have to enter a name I can't do anything except pressing the Pandora button and shut Tyrian down through the XFCE meny.


It was fine in the old version.


Does anyone else have this problem?


It's not generating the appdata folder I specified.. I think it's a PXML thing.. I'll play with it.


okay.. it's an odd issue.. having the same issues.


Edit: seems to have to do with Notaz's SDL.. if I disable it, it will allow you to type when saving and such... will need to find a solution since it doesn't fill the screen without it.


Edit: seems to have to do with Notaz's SDL.. if I disable it, it will allow you to type when saving and such... will need to find a solution since it doesn't fill the screen without it.
Click to expand...


When I have to enter a name I can't do anything except pressing the Pandora button and shut Tyrian down through the XFCE meny.


It was fine in the old version.


Does anyone else have this problem?
Click to expand...

yes i do, i also cant save on arcade mode

Thanks for the info, that most likely saved me a whole bunch of debug work.

I'm closing in on a final solution.. It took me a while to figure out which would be easier.. Hacking my own scaler to make the game use the whole screen since I couldn't use Notaz's SDL or use his improved SDL and cut out the unicode garbage that's preventing people from typing the save game name.. looks like hacking out the unicode garbage was the easier solution.. I need to do some play testing to ensure I didn't break other things and will push an update when ready.


Edit: pushed fixed version to the repo.. let me know if there are any more issues.
Last edited by a moderator: Dec 17, 2012
B

This was the first game I tried out on my Pandora and it's awesome to be playing it again!

I remember having a demo version of this on a magazine floppy disk that I played over and over. It's a great game. Thanks for the port!

Thanks!, glad you liked it.

Hi Trashy, just a quick post to say i've played your port of Open Tyrian extensively now and on the whole it's excellent! I have however noticed one detail that, while far from game-breaking, does effect gameplay and i havent noticed it in any other version of the game i have played (Tyrian - DOS, Tyrian 2000).

I Have noticed that any sidekicks that do not have an ammo count automatically fire when the normal forward weapon is fired, in most cases this is fine and is as it should be but with side weapons like Charge Cannons & Zica Supercharger this should not be the case as these weapons become more effective as they charge up when not fired. This seems to be quirk in your port of the game as i've noticed it doesnt occur in the DOS version, 2000 version, or the Old Pandora port of the game from several years ago. Wondering if you have any thoughts on this....

Well it could be from the latest source code release, it is being updated quite a bit.. I'll compile it for my regular desktop without the changes I've made and see if it behaves any differently.

been doing some experimentation regarding charge weapons auto-firing with the forward gun, i believe it to be an issue with keyboard controls. I'm not sure if its possible but if you could make the pandora buttons register as mouse-clicks instead of key depressions I'm almost certain this would rectify the issue. Will the PND detect a USB mouse? If so i can test this theory.